HAVANA, Cuba (CNN) -- A man named Ernesto pressed an old-fashioned radio to his ear, listening to a baseball game roughly 5,000 miles away. 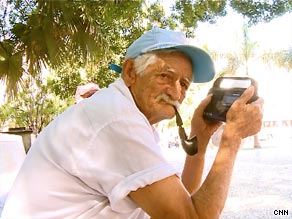 "Oh, it's already over," he groaned, listening to the staccato play-by-play of Sunday's Baseball World Cup championship. In the gold-medal game, played in Nettuno, Italy, team USA defeated Cuba, 10-5, to wrap up the World Cup played this year throughout Europe.

In the winning country, that news likely was overshadowed in most places by Major League Baseball, professional football, or dozens of other sports stories that developed on Sunday. But in Cuba, where baseball is as much a source of national pride as it is a game, the Baseball World Cup was big news.

Reverberations of that last out in Italy could be felt as far away as Havana's central park, where a daily gaggle of baseball fans often provide for the country's liveliest debate.

"The American pitching was strong," said Ernesto, still listening to the crackle and pop of his radio.

"But Cuban batters were not as good," he added.

For the widely anticipated match-up, Havana residents holed up in their homes Sunday afternoon to watch their national team take on their northern neighbor on TV.

Those without televisions huddled around a small radio in the capital's central park, appearing to hang on every broadcasted pitch.

"Strike three!" the radio sputtered as another Cuban batter was retired by U.S. starter Cory Luebke, who tallied seven strike-outs in four-and-a-third innings. He prompted a near-unison groan among the group.

The United States, led by Los Angeles Dodgers prospect Lucas May, scored early and often as May put the Americans ahead with a second inning three-run home run.

The Cubans refused to go quietly, rallying in the fourth inning and scoring two runs on three singles.

A two-run blast by Cuban first baseman Ariel Borrero in the sixth inning tied the game at 4-4 before a salvo of U.S. hits in the seventh drove in six runs, enough to secure the American win.

For team USA, the contest capped a 14-game winning streak that began after a first-round loss to Venezuela. Sunday's win is only the fourth U.S. championship in World Cup competition, with Americans having previously earned gold in 1973, 1974 and 2007.

For the Cubans, whose teams have brought home gold in 25 of the last 30 Baseball World Cup championships their country has played in, it was time to start looking ahead in quintessential baseball philosophy.

"They won it this year, but we will win it the next," said one Havana resident who declined to give his name.

Long a baseball powerhouse, Cuba has never finished out of the top three in World Cup competition, according to International Baseball Federation spokesman Jake Fehling.

But million-dollar contracts in professional baseball often have lured away top Cuban prospects and depleted national team talent, pulling star athletes such as Orlando "El Duque" Hernandez and Jose Contreras away from state salaries at home.

Cuban pitcher Ardoldis Chapman, who defected in July during a national trip to the Netherlands, is the latest example of top Cuban players seeking the bigger payoffs of major-league salaries.

Chapman, a lefty who reportedly throws over 100 mph, has sparked rumors of a potential bidding war among top major-league franchises.

Residents in Havana's central park, however, were unwilling Sunday to say more than a few words about the loss of star talent.

"If they leave, they leave," Ernesto said, still clinging to his radio.

Players come and go, but in Cuba, baseball -- and baseball talk -- is one steadying constant.

And in Havana's central park, the talk of Sunday's game -- the talk of baseball -- buzzed on, long after the last pitch was thrown.

All About Baseball • Cuba • International Baseball