Guantanamo prison not likely to close in January, officials say 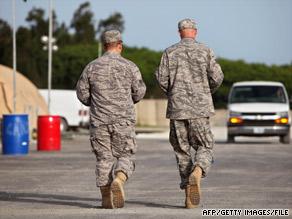 U.S. military personnel walk a road at the U.S. naval base at Guantanamo Bay, Cuba, in July.

They cited legal complications for the delay, but said they were still optimistic about shutting the detention facility for terrorism suspects soon.

The announcement represents a blow to the president, who signed an executive order and set the deadline with great fanfare during his first week in office.

During a signing ceremony at the White House on January 22, Obama reaffirmed his inauguration pledge that the United States does not have "to continue with a false choice between our safety and our ideals."

The president said he was issuing the order to close the prison camp in order to "restore the standards of due process and the core constitutional values that have made this country great even in the midst of war, even in dealing with terrorism."

The delay may provide fodder for Republicans such as former Vice President Dick Cheney, who has argued that shutting the Guantanamo prison would make the United States less safe. He said Obama should have had a detailed plan in place before signing the order.

"Even White House officials are now acknowledging that there is still no alternative that will keep Americans as safe as housing detainees at that secure facility off our shores," Senate Minority Leader Mitch McConnell, R-Kentucky, said in a written statement.

"Americans and a bipartisan majority in Congress will continue to reject any effort to close Guantanamo until there is a plan that keeps Americans as safe or safer than keeping detainees in the secure detention center," McConnell's statement said.

At its peak, the Guantanamo prison population exceeded 750, all men. More than 500 have been released, most into the custody of other countries.

The senior administration officials insisted the White House is making progress in finding third-party countries to accept the remaining detainees.

Approximately 2,200 staff members work there, from all branches of the U.S. military plus civilian employees.

All About Guantanamo Bay • Mitch McConnell