TEGUCIGALPA, Honduras (CNN) -- Ousted Honduran President Jose Manuel Zelaya said he and supporters holed up at the Brazilian Embassy were victims of a "neurotoxic" gas attack Friday morning that caused many people to have nose bleeds and breathing difficulties. 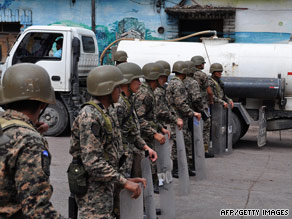 Soldiers stand guard Friday at the perimeter around the Brazilian Embassy in Tegucigalpa, Honduras.

An official with Brazil's Foreign Ministry told CNN there was some type of gas used in the area but could not confirm it was a nerve agent. Some embassy employees felt minor symptoms, said the official, who did not want his name used because that is foreign ministry protocol.

Roberto Micheletti, who was named president after the June 28 coup that removed Zelaya, told CNN on Friday afternoon that his government did not launch a gas attack on the embassy. A high-ranking police official had told CNN earlier that Zelaya's allegation was a "totally false statement."

Journalists, including CNN correspondent John Zarrella, were kept several blocks away from the embassy in Tegucigalpa, the Honduran capital, and could not confirm whether a gas attack had taken place.

Zelaya and his aides said at a news conference that a local public health specialist they identified as Dr. Mauricio Castellano took air samples near the embassy after the attack and determined that the gas contained HCN, an abbreviation for hydrogen cyanide. HCN can cause dryness and burning of the throat, shortness of breath, convulsion, coma and cardiovascular collapse.

Zelaya said he felt irritation in his throat and eyes Friday morning and went outside to get fresh air. When he did so, he said, he noticed that many people were sick.

"Practically all of us have felt the effects of these gases," he said.

Andres Tamayo, who was with Zelaya at the embassy and identified himself as a priest, said the chemical attack came from three sources: neighboring houses that have been evacuated, a white truck that was seen near the embassy and a low-flying helicopter.

"This is a terrorist act," Tamayo said.

Zelaya has been staying at the Brazilian Embassy since secretly returning to Honduras on Monday.

He showed photographs at the briefing that he said were of soldiers setting up gas-delivery systems and noise machines in neighboring yards.

The United Nations Security Council met Friday morning to discuss Brazil's concern over what is happening at its embassy. Brazil called for the meeting several days ago.

About 3,000 Zelaya supporters marched peacefully down a major boulevard Friday in the capital. Police and soldiers in riot gear lined the street but there were no reports of violence or arrests, CNN correspondent Zarrella said from the scene.

CNN's Kim Segal and Helena DeMoura contributed to this report.