HAVANA, Cuba (CNN) -- Thousands gathered in the Cuban capital on Sunday to pay their respects to one of Cuba's few remaining original revolutionaries, Juan Almeida, who according to state media died of a heart attack Friday evening. 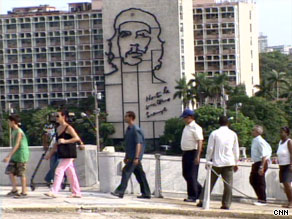 A single column of people stretched around Havana's Revolution Square in a well-coordinated show of solidarity and remembrance during what state media reported as a national day of mourning.

President Raul Castro and other top government officials were reportedly on hand, though elder brother and former Communist leader Fidel Castro -- not seen in public since abdominal surgery in 2006 -- did not make an appearance.

Almeida, 82, fought alongside Fidel Castro and was among only a handful of surviving Cuban leaders who still bore the title "Commander of the Revolution."

Widely admired among Cuban nationals, Almeida participated in the failed attacks on the Moncada army barracks in 1953. He was aboard the famed yacht "Granma," that carried the small group of Cuban rebels who would later topple U.S.-backed dictator Fulgencio Batista.

A vice president and member of the Communist government Central Committee, Almeida was among only a few black leaders in top government posts.

"This shows how we're all participants in our revolution and there is nothing that sets you apart," said Havana resident Fernando, who declined to give his last name. "Not color, nor religion," he added.

Almeida's death underscores the mortality of an aging cast of Cuba's revolutionary leaders.

Widespread speculation surrounding the health of Fidel Castro grew in 2006 after he underwent abdominal surgery and later ceded the presidency to his younger brother, Raul.

The elder Castro recently surfaced in a series of photos and video looking healthier, though he has not appeared in public in over three years.