(CNN) -- Ramping up pressure on Honduras' interim government, the United States has revoked the visa of the beleaguered country's leader, a senior Honduran official told CNN en Espanol on Saturday. 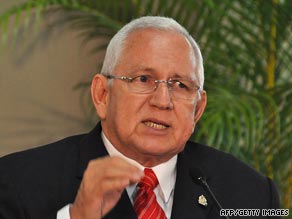 Roberto Micheletti and his supporters say Honduras underwent a constitutional transfer of power, not a coup.

The U.S. State Department recently announced that it would pull the visas of members of Honduras' de facto regime.

In recent weeks, the United States has stepped up its call for the current Honduran government to restore ousted President Jose Manuel Zelaya to power. Zelaya was seized by the Honduran military in his pajamas and sent into exile on June 28.

The Millennium Challenge Account is a program started under the Bush administration to reward good governance.

The agency's cuts followed an announcement last week by the United States that it was terminating all nonhumanitarian aid to Honduras to pressure the interim government to end the political turmoil and accept the terms of an agreement known as the San Jose Accord. The accord calls for Zelaya's return to power.

The political crisis stemmed from Zelaya's plan to hold a referendum that could have changed the constitution and allowed longer term limits. The country's congress had outlawed the vote and the supreme court had ruled it illegal.

Micheletti and his supporters say that Zelaya's removal was a constitutional transfer of power and not a coup. The United Nations has condemned Zelaya's ouster and does not recognize Michiletti's government.

While the United States has called Zelaya's ouster a coup, it has not formally designated it a "military coup," which, under U.S. law, would have triggered a cutoff of all non-humanitarian aid regardless. Senior State Department officials said the Obama administration was reluctant to make the formal designation in order to preserve its flexibility for a diplomatic solution.

A presidential campaign in Honduras kicked off last week. However, the United States said it would not support the outcome of the elections unless Zelaya was restored to power.