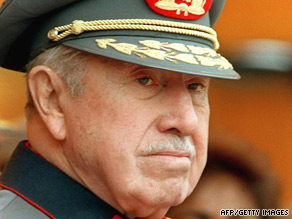 The scale of the order by Judge Victor Montiglio makes this the largest human rights prosecution case in Chile's history.

The Pinochet dictatorship ruled from 1973-1990, after which Chile returned to civilian rule under a democratically elected government. Government investigations conducted after Pinochet left power say nearly 2,300 people disappeared during the dictatorship and another 30,000 were tortured.

At least 51 of the warrants were in connection with a disinformation campaign in the 1970s known as Operation Colombo that historians say was aimed at hiding human rights abuses. Other warrants were linked to Operation Condor, which involved a network of secret police agencies in the region that targeted political opponents in the mid- and late-1970s, and a plot against communist leaders known as the Calle Conferencia case.

About half of those named in the warrants were facing charges related to the Pinochet regime for the first time.

The warrants included former military and police officers who were members of Pinochet's feared intelligence service, known as DINA.

All About Augusto Pinochet • Chile