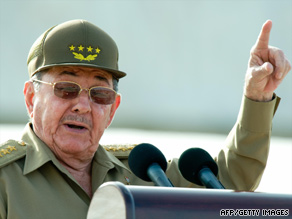 Castro indicated a need for additional preparations before the session can take place, noting that the meeting would be the last led by the "historic leadership of the revolution," according to Granma, Cuba's state-run newspaper.

The meeting -- which had been scheduled for later this year -- was expected to address the party's political future, including whether former President Fidel Castro will continue as party head.

Fidel Castro ceded the presidency to his younger brother, Raúl, last year but retained leadership of the Communist Party, the only legal political party in Cuba.

The elder brother -- who had run Cuba since 1959 -- has not appeared in public since abdominal surgery in 2006.

No new date has been set for what would be the sixth meeting since the party was established, according to state media.