(CNN) -- A diary reported to have come from a top Colombian guerrilla leader killed last year says key officials in Ecuador accepted money from the rebels and had connections with Mexican drug gangs. 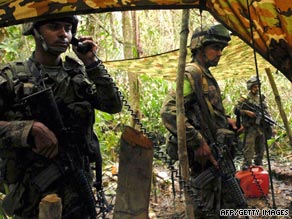 The Revolutionary Armed Forces of Colombia, known as FARC, has been at war with the government for decades.

The money was meant to finance Ecuadorian President Rafael Correa's 2006 election campaign, Marxist rebel Raul Reyes is said to have written in a diary allegedly obtained after his death.

Ecuador denies the allegations and has asked the Organization of American States to investigate.

"The president of the republic did not know anything about this and never sent any emissary to finance his electoral campaign," Interior Minister Gustavo Jalkh said at a news conference Wednesday.

Wednesday's revelation was the second instance in two weeks tying Correa to donations from the Revolutionary Armed Forces of Colombia, known as FARC.

The guerrilla group also had conversations with Correa's emissaries and has reached "some accords, according to documents that we have," Suarez said in the videotape.

FARC issued a statement Tuesday denying that the rebels have "given money to any electoral campaign of any neighboring country."

The guerrillas accused the United States and Colombia of manipulating the Suarez video to make Correa look bad.

FARC has been at war with the Colombian government for more than 45 years.

In the latest allegations, Reyes, FARC's second-in-command until his death in March 2008, identifies the Ecuadorians who had contacts with the rebels as former head of security Gustavo Larrea, former under secretary for governing Ignacio Chauvin, retired Col. Jorge Brito and dentist Luis Ayala.

"Larrea, Brito and Dr. Ayala, I am sure, move among the Mexican drug cartels and, in order to have free reign, collaborate with the CIA," Reyes wrote, according to the state-run Notimex news agency in Mexico.

"For them, I am the true loot, and turning me over would be their major deal."

Ecuadorian Interior Minister Jalkh and Foreign Minister Fander Falconi declined Wednesday to confirm the diary's authenticity, attributing to it "neither truth nor falseness."

Instead, they said they turned it over to the Organization of American States so that the hemispheric body can verify its authenticity. Ecuadorian officials also turned a copy over to the nation's attorney general.

The 20-page diary goes from July 2007 to February 23, 2008, seven days before a Colombian bombing attack killed Reyes at his camp inside the Ecuadorian border.

In addition to Reyes, the attack killed 24 people, including four Mexicans and an Ecuadorian. As a result, Ecuador broke diplomatic relations with Colombia in March 2008.

Venezuelan President Hugo Chavez, an ally of the leftist Correa, also strongly objected to the attack and sent tanks to his country's border with Colombia in March 2008.

On Tuesday, Chavez froze relations with Colombia and recalled Venezuela's ambassador after Colombia revealed that the FARC had gotten hold of shoulder-launched anti-tank grenades that Sweden sold to Venezuela 20 years ago.

"No matter how much Nacho [Ignacio] Chauvin insists, as well as correspondence from Larrea, I don't see any convenience in staying at the Angostura camp that I occupied as a result of Col. Brito," Reyes wrote. "I know that Larrea is behind all this."

Writing about the Angostura camp on the border with Colombia, Reyes said, "This place is a trap. They have me tied up here under the pretext that I should receive the international delegations. All this stuff is very false."

He goes on to doubt the people who come to see him at the jungle base.

"The revolutionaries who visit me, save for a few people, only want money and deals. I ask myself, how many of them are infiltrators who work as double agents? I feel the presence of double agents in Correa's intimate group, without a doubt."

Giving money to Correa was a waste, Reyes wrote.

"Trusting Correa was suicide," the diary said. "All the contributions of money for Correa's campaign weren't worth a damn."