LAS MANOS, Nicaragua (CNN) -- Ousted Honduran President Jose Manuel Zelaya returned to Nicaragua late Friday night after briefly entering his home country from which he was removed in a military coup nearly a month ago. 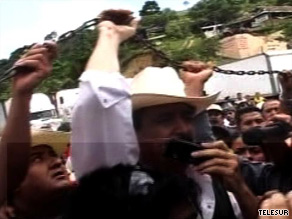 Zelaya crossed a few yards into Honduras on Friday afternoon and then hunkered down while he carried on extensive telephone conversations and press interviews.

The Honduran government said it would arrest Zelaya if he pushed further into the nation and would ask the International Red Cross to monitor his treatment.

Provisional President Roberto Micheletti, who was sworn in hours after Zelaya was removed from office on June 28, said Friday night his country was willing to continue negotiations. Two previous rounds hosted by Costa Rican President Oscar Arias were deadlocked over the Honduran government's refusal to allow Zelaya to return to power.

"I offered several days ago to give up my position if Mr. Zelaya would stop inciting his followers to violence," Micheletti told CNN en Español.

Micheletti said Zelaya had no intention of returning to Honduras, where he faced certain arrest by the national police. Zelaya went back to Nicaragua, Micheletti said, to keep causing problems.

"We have received information that they want to continue with these type of actions that only incite the public," he said.

Asked in an interview with CNN en Español late Friday night why he did not go farther into Honduras, as he had vowed to do, Zelaya said he did not want to cause any violence.

"You have a correspondent here who can tell you how aggressive the military has been acting," Zelaya said.

The latest events unfolded live and in front of a multitude of TV cameras as Zelaya led a 20-vehicle convoy over two days from the Nicaraguan capital of Managua to the Honduran border. Along the way, he held news conferences and conducted numerous telephone interviews.

The highlight occurred Friday afternoon when Zelaya walked under a border chain and returned to his home soil.

"I am not afraid when I work for a just and noble cause," Zelaya said to someone on a cell phone moments after crossing the border, surrounded by scores of reporters and cheering supporters.

Honduran soldiers pulled back about 25 meters (80 feet) from the border as Zelaya stopped and continued talking on the phone.

He stopped in front of a large white sign that says, "Bienvenidos a Honduras" (Welcome to Honduras).

Zelaya remained in the area for several hours, saying he was waiting for his wife to join him. She stayed in Honduras when the military flew Zelaya out of the country during the coup.

His wife, Xiomara Castro de Zelaya, told CNN en Español that she was being kept from joining her husband. Asked what she was feeling, she said, "Anguish. Anguish is what we feel at this moment because he is a man of peace."

Moments before crossing the border, Zelaya talked briefly face to face with army Lt. Col. Luis Roicarte, with whom he had been previously talking on the phone, said CNN's Karl Penhaul.

The army officer cut off the conversation with Zelaya because he had to take a call, likely from one of his superiors.

"The colonel told me, 'You can't cross the border.' I said, 'I can cross.' I crossed, shook his hand and asked for communications with his higher-ups," Zelaya said.

In Washington, the State Department issued a travel alert for Honduras and Secretary of State Hillary Clinton criticized Zelaya's actions.

"We have consistently urged all parties to avoid any provocative action that could lead to violence," Clinton said. "President Zelaya's effort to reach the border is reckless. It does not contribute to the broader efforts to restore democratic and constitutional order in the Honduras crisis."

The State Department warning "alerts American citizens to the current unstable political and security situation in Honduras, and recommends that American citizens defer all non-essential travel to Honduras until further notice."

While the drama unfolded at the border, Micheletti supporters held a large and colorful rally in San Pedro Sula.

Zelaya supporters amassed in the Honduran city of El Paraiso, about 12 kilometers (7 miles) from the border with Nicaragua. They were met there by about 1,500 police and soldiers, some of whom fired on the crowd, a correspondent for CNN en Español reported from the scene.

The police and soldiers fired tear gas at the demonstrators for about 15 to 20 minutes before letting off a barrage of 15 to 20 shots, Jimenez said.

The apparent shootings happened minutes after Zelaya held a news conference on the Nicaraguan side of the border and asked police and soldiers to let him back into his country.

Watch a report on Zelaya's return »

"Allow me to return to my country," Zelaya said, directly addressing his nation's police and army. "To embrace my fellow countrymen, my children, my wife, my mother."

Honduran police and soldiers set up numerous roadblocks between Tegucigalpa, the capital of Honduras, and the border, and established an immediate curfew in the area until 4:30 a.m.

The shootings came after the National Police director, Salomon Escoto Salinas, said in a televised news conference that cars and people were being searched for weapons.

"Our job is to maintain order of the people who are protesting," Escoto Salinas said. "If there is any vandalism, the police will act and we will apply the laws."

He declined to say in an interview with CNN en Español whether Zelaya would be arrested if he crossed into Honduras. The National Police have a plan, he said, and it will be carried out.

The Honduran political crisis stems from Zelaya's desire to hold a referendum that could have led to extending term limits by changing the constitution, even though the congress had outlawed the vote and the supreme court ruled it illegal.

The takeover has drawn international condemnation, including demands by the United Nations General Assembly, the OAS and the European Union that Zelaya be reinstated.

Micheletti has steadfastly rejected characterization of the takeover as a coup, saying Zelaya's removal was a constitutional transfer of power.

He repeated that contention Friday night.

"There has been no coup because in a coup the military remains in power," he told CNN en Español.