(CNN) -- Venezuela's role as a transit point for South American cocaine bound for the United States and Europe has significantly expanded in recent years, according to a U.S. government report released Monday. 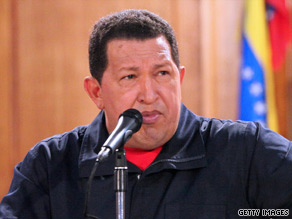 President Hugo Chavez says Venezuela has increased success in the drug fight since ousting the DEA in '05.

The Venezuelan government contributed to a more than fourfold increase in cocaine flow between 2004 and 2007, in part by providing a safe haven for Colombian drug traffickers while reducing counternarcotics cooperation with U.S. officials, the General Accounting Office study said.

The report's findings, which were denied by Venezuelan President Hugo Chavez, may present a new obstacle to the Obama administration's attempt to thaw America's relations with the influential South American country.

The total amount of cocaine shipped from Venezuela to the United States, Europe and West Africa jumped from roughly 60 to 260 metric tons over the four years, the report said, with the most recent total representing approximately 17 percent of cocaine produced worldwide.

The report said that while the United States remains the primary market for most cocaine going through Venezuela, there also has been a notable increase in cocaine shipped to Europe -- with Spain serving as the primary point of entry.

In 2006, Spanish authorities confiscated roughly 50 metric tons of cocaine -- more than two-fifths of the total seized on the continent.

The report also said that the South American drug trade has been bolstered in recent years by the Venezuelan government's decision to actively assist several illegal armed groups. It specifically highlighted a Venezuelan "lifeline" thrown to the Revolutionary Armed Forces of Colombia, or FARC.

FARC, which has been designated a terrorist organization by the U.S. government, accounts for 60 percent of the total cocaine exported from Colombia to the United States, the report said. The group has received support from Chavez for its violent opposition to the Colombian government, which is frequently at odds with Chavez's administration.

Partly as a result of Venezuela's support for FARC, the report said, U.S. presidents in recent years have repeatedly "designated Venezuela as a major drug transit country that has 'failed demonstrably' to meet its international counternarcotics obligations and responsibilities ... both within and along its borders."

The report described cocaine being smuggled "aboard maritime vessels" departing from "Venezuela's long coastline or aboard suspicious aircraft that take off and land from hundreds of clandestine airstrips."

Chavez, speaking to reporters in Bolivia over the weekend, dismissed the report as "a new lie from the government of the United States." He said Venezuela has had increased success stopping drug traffickers since expelling the U.S. Drug Enforcement Administration in 2005.

Venezuelan government officials have also pointed out, according to the report, that it is difficult to prevent the entry of drugs from Colombia given the countries' lengthy border "and rugged terrain that has long been the scene of crime, smuggling, and trafficking."

The report may prove problematic for an already rocky relationship between the United States and Venezuela. The two countries recently agreed to reinstate ambassadors expelled during a diplomatic dispute last year.

President Obama was heavily criticized for striking what conservative critics said was an overly friendly tone toward Chavez at the Summit of the Americas in April. Chavez, who once famously called then-U.S. President George W. Bush the "devil," has repeatedly condemned the United States as an imperialist nation.

"The findings of this report have heightened my concern that Venezuela's failure to cooperate with the United States on drug interdiction is related to corruption in that country's government," said Sen. Richard Lugar, R-Indiana, who initially requested the GAO report.

"I would hope that the government of Venezuela understands that the findings of this report merit serious corrective action. I encourage expeditious action in this regard. ... The fight against drugs must be won through full cooperation among producing, transit and consuming nations."