TEGUCIGALPA, Honduras (CNN) -- Honduran soldiers shot out the tires of buses headed for a demonstration in support of ousted President Jose Manuel Zelaya, a video obtained by CNN shows. 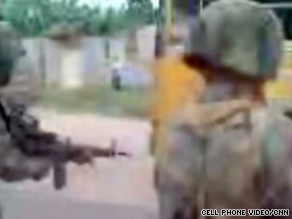 This image from a cell phone video shows Honduran soldiers shooting out the tires of a bus.

The video, believed shot within the past two days, shows a line of buses stopped on a road in what is reported to be the city of Limones. The city is about 70 miles (112 kilometers) northeast of the capital, Tegucigalpa.

A noisy, chaotic crowd is milling around the buses while soldiers move among them. Some slight pushing can be seen.

"The people united can never be defeated," many crowd members chant in unison.

Watch the soldiers shoot the tires »

The recording was made on a phone camera by Zelaya supporter Oscar Baron and made available to CNN.

Another video of the same incident was posted on the Youtube Internet site Thursday under the title "Golpe de estado en Honduras" (Coup in Honduras).

CNN reporters in Honduras have received reports from Zelaya supporters who say troops have stopped buses bringing protesters from the countryside to prevent them from attending rallies in Tegucigalpa.

Honduran military officials said they were unaware of any such incidents.

"I have not been informed of this incident. I cannot confirm or deny it," Honduran Army spokesman Col. Ramiro Archaga told CNN by phone.

The military's main job is to protect the nation's borders, Archaga said, "not guaranteeing internal security."

Hector Ivan Mejia, spokesman for the Security Ministry, said he had no information of buses being fired upon.

"Protesters will be arrested for vandalic acts but they will not simply be stopped on their way to protests," Mejia said.

The military removed Zelaya from power Sunday and flew him to nearby Costa Rica. Congressional leader Roberto Micheletti was sworn in that afternoon as interim president.

Pro-Zelaya protesters have skirmished with troops in some parts of Tegucigalpa, but the incidents have received little mention from Honduran TV stations. Instead, the stations have given wide coverage to large demonstrations in support of Micheletti.

The United Nations and the Organization of American States have condemned the coup and demanded that Zelaya be reinstated. The United States and most countries in Latin America also have criticized the coup.

The United States and the World Bank have suspended some aid and many nations have recalled their ambassadors from Honduras.

In an emergency meeting late Tuesday, the OAS gave Honduras 72 hours to reinstate Zelaya or face suspension from the 35-nation hemispheric organization. That deadline expires Saturday and the OAS has scheduled a 1 p.m. meeting to discuss the situation.

OAS Secretary General Jose Miguel Insulza arrived Friday afternoon in Honduras to notify "stakeholders" of the terms of the resolution, the organization said.

Zelaya, a leftist who took office in 2006, has said he will return to Honduras after Saturday's deadline. Micheletti said Zelaya would be arrested if he returns.

At the center of the dispute was a referendum Zelaya had vowed to carry out even after the country's supreme court and congress found it illegal. The nonbinding referendum could have led to the creation of a constitutional assembly to modify the country's charter to allow the president to run for re-election.

Venezuelan President Hugo Chavez, a Zelaya ally, won a similar referendum this year and many Hondurans thought Zelaya was trying to maneuver a way to seek re-election in November. Zelaya has denied that was his intent.