(CNN) -- Honduran authorities on Monday clashed with supporters of deposed President Jose Manuel Zelaya, but the extent of the unrest appeared limited. 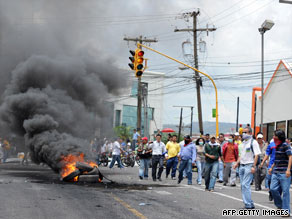 The Telesur TV network showed soldiers advancing on some streets of the capital, Tegucigalpa, and blue-helmeted police clashing with noisy demonstrators, one day after military troops detained Zelaya and sent him into exile. Other images showed troops, tanks and other military assets deployed around the presidential grounds.

The station, a conglomerate formed by several Latin American governments and partially funded by the pro-Zelaya Venezuelan government, also aired images of demonstrators setting fires in the streets.

Gauging the size and scope of the demonstrations and clashes was difficult because of limitations that journalists reported.

Adriana Sivori, a reporter for Telesur, reported that she and other journalists were briefly detained and mistreated by Honduran soldiers. She was live on television as she described the troops transporting them at gunpoint.

Two national television stations were taken off the air following Sunday's military-led coup, and a third station told CNN en Español that its content was being limited by authorities.

At least 15 were injured Monday, the newspaper La Prensa reported. iReport.com: Are you there? Share your photos, videos

The military deposed Zelaya early Sunday and flew him to Costa Rica. Roberto Micheletti, president of the Congress, was sworn in as provisional president.

Zelaya had been at odds with the other branches of government over a referendum he wanted to hold Sunday. The nation's Supreme Court ruled the referendum was illegal and Congress voted not to hold it.

The Supreme Court also overturned Zelaya's dismissal of Honduras' top general, who said the military would not participate in the referendum. The court ordered he general be reinstated immediately.

Zelaya disregarded those actions and vowed to hold the vote Sunday anyway.

On Monday, Micheletti began to build his provisional government. He named seven new members to his cabinet, which he said will be in place until the planned presidential elections slated for November of this year.

Micheletti, formerly the president of Congress, has said the change in power was not a coup, but a democratic process that saw the ousting of a president who had exceeded his power.

The Honduran Supreme Court said after the coup that it had authorized the military action.

The United States and most Latin American nations have condemned the coup, the first in Latin America since the end of the Cold War.

While military interventions were once routine in Latin America, civilian governments have held sway across the region since the 1980s, and previously all-powerful militaries have receded into the background.

"That history is a thing of the past, and it should be buried so that it never happens again," Jorge Arturo Reina, Honduras' ambassador to the U.N. told CNN en Español, following a meeting of the General Assembly to address the issue.

The head of the Organization of American States also condemned the coup.

President Obama on Monday called the turmoil in Honduras a step backward from the "enormous progress of the last 20 years in establishing democratic traditions in Latin America."

Watch what Obama has to say about the coup »

"We believe that the coup was not legal and that President Zelaya remains the president of Honduras," Obama said.

Though deposed, Zelaya continued to carry out his presidential duties, attending a special meeting of the leftist group ALBA, the Spanish acronym for Bolivarian Alternative for the Peoples of Our Americas, in Nicaragua.

ALBA, founded by Cuba and Venezuela in 2004 to counter U.S. influence in Latin America, said member nations would withdraw ambassadors and top diplomats from Honduras until Zelaya is restored to power.

Zelaya is expected to travel to the United Nations on Tuesday.

Despite widespread condemnation for the coup, analysts see plenty of blame to go around -- and no easy solution. iReport.com: Are you there? Share your photos, videos

"There are no heroes in this story," said Larry Birns, director of the Washington-based Council on Hemispheric Affairs. "These people are caricatures of rectitude rather than examples of it."

The Honduran Supreme Court, he said, is "one of the most corrupt institutions in Latin America."

And Zelaya overplayed his hand, Birns and others said.

"Zelaya was part of the problem," said Peter Hakim, president of the Inter-American Dialogue policy institute. "He's partly responsible for what happened. He was pushing too hard on a very fragile political institution. He was just plowing ahead against the wishes of every political institution, including his own political party."

"What happens when the Supreme Court decides against the president and the president ignores it? Who enforces it?" asked Robert Pastor, a Latin America national security adviser for President Jimmy Carter in the late 1970s.

What happens next is clearly unknown.

U.S. Secretary of State Hillary Clinton said Monday that an OAS delegation would travel to Honduras as early as Tuesday to begin working on restoring a constitutional government.

"According to mainstream Honduran media sources, Zelaya's removal has the widespread support of the political and business elite and the military, and it appears doubtful that he will be able to return to power," said Heather Berkman, an analyst with the Eurasia Group consulting firm.

"An exit strategy is needed," Birns said. "But it's going to be extremely difficult to come out with an exit strategy unless they get consent of key players like the national legislature."

Pastor holds out some hope.

"I don't think it's impossible," he said.

Said Hakim: "You can never put the toothpaste back in the tube. But you can provide a peaceful transition process."