(CNN) -- Investigators probing the deadly crash of Air France flight 447 over the Atlantic are running out of time to find the flight data recorders which could prove crucial to working out what caused the disaster. 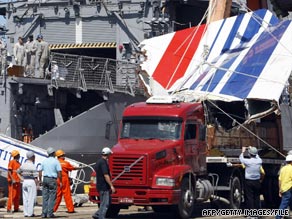 The tail fin of the Airbus A330 that crashed in the Atlantic is unloaded in Brazil earlier this month.

Although some debris and 50 bodies have been retrieved, air crash investigators remain in the dark about what caused the airliner to plunge into the sea off the coast of Brazil killing the 228 people onboard on June 1.

The wreckage is believed to be about 15,000 feet (4,500 meters) deep, amid underwater mountains and mixed in with tons of sea trash.

A French nuclear submarine and other vessels are searching for the flight data recorders, commonly known as black boxes, by attempting to trace their locator beacons, which send out acoustic pulses, or "pings," to searchers.

The U.S. Navy has contributed two high-tech acoustic devices -- known as towed pinger locators -- which have been attached to French tug boats and can search to a maximum depth of 20,000ft (6,100 meters).

The firm which makes the recorders, Honeywell Aerospace, has told CNN it has a 100 percent recovery record from air accidents.

Honeywell said it was hard to estimate how much battery life the locator beacon on the recorders had, as it depended on the conditions, but it is typically around 30 days.

The American National Transportation and Safety Board says on its Web site that large commercial aircraft and some smaller commercial, corporate, and private aircraft were typically fitted with data recorders.

One recorder taped radio transmissions and sounds in the cockpit, such as the pilot's voices and engine noises, the NTSB said.

Sounds of interest could be engine noise, stall warnings, landing gear extension and retraction, and other clicks and pops. From these sounds engine revs per minute, system failures, speed and the time at which certain events occurred could often be determined, the NTSB said.

Communications with air traffic control, automated radio weather briefings and conversations between the pilots and ground or cabin crew were also recorded.

The other recorder monitored at least 88 important parameters such as time, altitude, airspeed, heading and aircraft attitude, the NTSB said.

In addition, some could record the status of more than 1,000 other in-flight characteristics ranging from flap position to smoke alarms.

The older recorders used one-quarter inch magnetic tape as a storage medium and the newer ones digital technology and memory chips.

Both recorders were installed in the most crash survivable part of the aircraft, usually the tail section, according to the NTSB.

Each recorder was equipped with an underwater locator beacon to assist in locating in the event of an over water accident. The device, called a pinger, was activated when the recorder was immersed in water and could transmit from depths down to 14,000ft (4,270 meters).

The recorders, actually orange in color, are built to withstand the toughest conditions, with an impact tolerance of up to 3400Gs, water pressure resistance to 20,000ft (6,100 meters), fire resistance of 1,100 degrees Celsius (2012 degrees Fahrenheit) and a battery shelf life of six years or more, with 30-day operation capability on activation, the NTSB said.