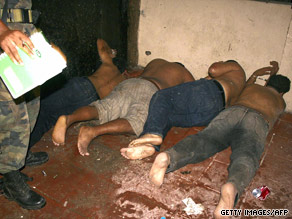 Suspected gang members are handcuffed after a gunbattle in Acapulco, Mexico, on Saturday.

Mexican soldiers, in trucks and helicopters kept watch over the resort town Monday. Along with swine flu fears, the uptick in violence threatens the tourist economy of Acapulco and other popular resort areas.

Witnesses told police that just before 6 a.m., gunmen armed with AK-47s stepped out of two luxury vehicles, walked toward the police station in the Ciudad Renacimiento neighborhood and began shooting.

Acapulco officers Gilberto Reducindo Salazar and Arturo Tonala Aguilar were killed in that incident, according to Notimex.

The Guerrero attorney general's office said the attacks could have been conducted by the same people, as there was a 30-minute gap between them, the state agency reported.

It was unknown whether the attacks were connected with Saturday's shootout, which started when soldiers went to a location called Avenida Rancho Grande in Acapulco on an anonymous tip. They were met by gunfire, according to a statement from Mexico's Ministry of Defense.

Five people were arrested in connection with the shootout. Sixteen gunmen and two soldiers were killed, and nine soldiers were wounded, the statement said.

All About Acapulco • Mexico