(CNN) -- A fire that claimed the lives of 44 children at a day-care center in Hermosillo, Mexico, started Friday in an air-conditioning unit in an adjacent warehouse, the attorney general of Sonora said Monday. 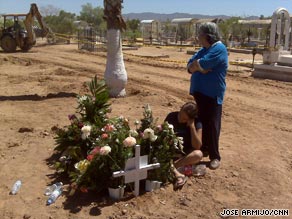 Investigators have not determined whether the fire was caused by an overheated motor or deficiencies in its installation, said Abel Murrieta Gutierrez, according to the state-run news agency Notimex.

However it started, there's no doubt it moved toward papers in bookshelves on the wall shared with the building housing ABC Day Care, where 141 children and day-care workers were, he said.

The two buildings also shared a roof, which contained a false bottom made of polyurethane, which overheated, emitting highly toxic fumes, he said. He blamed all 44 of the deaths on the fumes.

The general director of the Mexican Institute of Social Security vowed investigators will pursue the case wherever the evidence takes them.

Daniel Karam Toumeh had said Sunday that the building had passed an inspection on May 26.

"Here, I want to be very emphatic, in the sense that in Social Security we don't cover for anyone, don't defend anyone, we are the most interested in finding out what it was that happened," he said.

As of Monday morning, 20 children ages 1-5 were hospitalized in Hermosillo, and 13 had been taken to other hospitals, including three to Sacramento Shriners Hospital in California, where pediatric burn treatment is a specialty.

Watch parents gather at the site of the fire »

Hermosillo, the capital of the state of Sonora, is about 200 miles (320 kilometers) south of the U.S. border in northwestern Mexico.

On a radio show, a firefighter said Monday that many of the children were napping at the time of the fire and died in their sleep.

Jose Jesus Diaz, the first firefighter to enter the day-care center, told Radio Los Cheros that he arrived to find some people ramming the building with their vehicles in an effort to reach the children. Inside, Diaz said, he saw children in sleeping positions on the floor.

"They never knew what happened," Diaz told the radio station.

The scene was one of people crying, calling out names and running with babies, he said.

"There's an image that I will carry for the rest of my life: a shirtless man walking outside holding a young boy, yelling 'fireman, fireman, save my son,' but the boy was already dead," Diaz said.

Watch a town in deep shock »

Of the 20 children hospitalized in Hermosillo, 12 were in serious condition.

All About Mexico • Sacramento