(CNN) -- Anne and Michael Harris were an "extraordinary" couple with a zest for life, their niece said. 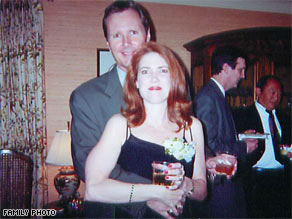 "We truly hope that they are remembered for the way they lived their lives and not this tragic end," Charlstie Laytin said in a telephone interview Wednesday. "We're all just devastated and going to miss them both so much."

The Harrises were two of three Americans on board Air France Flight 447 when it crashed Monday.

The plane was carrying 228 passengers and crew from Rio de Janeiro to Paris, France, when it crashed four hours into the journey. Investigators have not determined the cause of the accident.

An official list with the victims' names was not available Wednesday afternoon.

Michael Harris, 60, was a geologist in Rio de Janeiro. He worked for Devon Energy, a U.S.-based independent natural gas and oil producer, a company spokesman said.

The couple were traveling to Paris for a training seminar and vacation, Miley said.

The two "loved everyone, they loved life," Laytin said.

"Definitely glass-half-full kind of people," she added, recalling her uncle as a "ham," who could always offer a laugh on a bad day.

She remembered a moment a few summers ago when her family was in Vermont, and had just seen a classical performance of Mozart.

They were "just sitting around and having a glass of wine, and laughing and talking about family and life and what was going on in our lives ... [the Harrises] could never get enough information about what all their nieces and nephews and family members were doing," she said.

"It's really the last time I can remember us all sitting around as a family and I'm so glad that I have that memory."

She said her family was hopeful the investigation would soon determine what had gone wrong.

"I think the initial shock of it all has really started to wear off, and the reality that they're gone is starting to set in," she said.

"The grief and the grieving process is beginning and we're just really focused on helping each other heal."

The majority of the people on the flight came from Brazil, France and Germany. The remaining victims were from 29 other countries.

Ten were employees of French electrical equipment supplier CGED, according to Agence France-Presse.

Nine of those employees had won the trip to Rio from CGED because of their strong work performance, AFP said.

"There was a competition for the best sales reps ... and nine of them won and went to Brazil for four days," Laurent Bouveresse, CGED chief executive, told AFP.

The nine were allowed to take a friend or partner, and an executive also went along, Bouveresse said, according to the news agency.

Two others believed to have been on the flight were an engaged couple, Julia Schmidt of Brazil and Alex Crolow of Germany, the couple's friend, Brian Buzby of Houston, Texas, told CNN affiliate KTRK.

Buzby said he met the two while they were all students at Bucerius Law School in Germany. They finished studies last August, KTRK reported.

"This was Alex taking her back to tell her mom they were going to get married," Buzby told KTRK.

"I just hope that they were not suffering, and at least they were together, because I would have hated for one of them to go through it alone," Buzby said.

"They were my two best friends. I just hope she knows I loved her," Buzby said.