(CNN) -- At least 10 people were killed, and an unknown number remained missing Wednesday, after a boat authorities believe was used for human smuggling capsized off the coast of Florida. 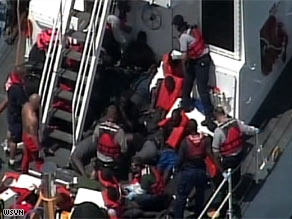 The Coast Guard said it rescued 26 people from a capsized boat off the coast of Florida.

Almost all of the victims are believed to be from Haiti and the Bahamas, according to the U.S. Coast Guard -- which said a dangerous number of people was packed onto a small pleasure cruiser.

The Coast Guard said it rescued 26 people from the boat, and searchers didn't know how many more people had been on the boat.

"You don't put 26 people on a small boat. It was way overloaded, completely unsafe," said Capt. Jim Fitton, the Coast Guard's sector commander in Miami, Florida. "With smugglers, you have the potential for this because smugglers aren't interested in people's welfare. They're interested in making money."

The boat capsized about 15 miles east of Boynton Beach, Florida, some time around 2 a.m. Wednesday, the Coast Guard said. The agency was notified more than nine hours later by someone who saw the boat.

There were women and children on the boat, Fitton said. A pregnant woman was taken to a hospital, while most of the victims remained onboard a Coast Guard cutter that was being used in the continuing rescue efforts, he said.

Only eight of the people rescued by Wednesday afternoon were wearing life jackets.

The Rev. Luke Harrigan, a Ft. Lauderdale, Florida, pastor to members of the Haitian community who is working with the Coast Guard, said he is contacting family members of the victims who were killed.

"Most of them now didn't even know they were coming to the United States," he said. "Sometimes the person organizing the trip doesn't even tell them where they are going."

He said it's not uncommon for smugglers to charge people from the impoverished island nation as much as $4,000 for passage into the United States.

Coast Guard rescuers were continuing to search the area of the crash Wednesday evening.