(CNN) -- Fear and skepticism on the streets of Mexico have led to panic buying and deep suspicions about the government. 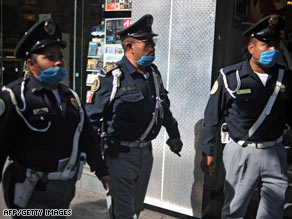 Can officials handle a deadly swine flu epidemic, many people are asking, and are authorities lying about what's really going on?

The nervousness and distrust are not limited to Mexico City, where government officials said most of the 159 deaths suspected of coming from the 2009 H1N1 flu strain have occurred.

Villahermosa, in Tabasco state, is 567 miles (913 kilometers) away. The state government said there have been no swine flu cases there.

You can't find a bottle of hand sanitizer or a face mask for sale anywhere in town, said resident Adrian Garrido. He admits to his own panic buying: bottled water, canned goods and powdered milk for his two sons, ages 6 months and 6 years.

The same shortages could be found in Nayarit state, where Gov. Ney Gonzalez Sanchez announced on his Facebook page late Wednesday that two store chains had just received shipments of sanitizer and masks. Another Facebook poster later said he went to one of the stores but the supplies had not arrived. Maybe Thursday, he was told.

Watch as medics take no chances with suspected patients »

"Out on the street, people are nervous," said John Mill Ackerman, a professor at the Autonomous National University of Mexico who has lived in Mexico City for 15 years.

"They're starting to get nervous," she said. "They will be very scared as information comes out."

Beyond the fear, though, lies a widespread mistrust that officials are not leveling with residents.

"There's a general feeling of lack of confidence in the government," Ackerman said. "They're more skeptical. They don't believe everything the government tells them, so they don't know how big this crisis really is."

Garrido said his family and friends don't know what to believe.

"Sincerely," he said, "there's uncertainty that the state government is not capable."

He points to rain-induced flooding that left much of Villahermosa under water last year. Many town residents, he said, believe the Tabasco state government knew there would be problems but didn't say anything for fear of alarming people.

"With that precedent," Garrido said, "people are afraid that the state can't take care of matters. That with an epidemic it would get bigger and bigger, and there won't be medicine or health care."

Garrido sounds wistful when he said, "I don't want to believe that the government is hiding information."

Salazar said, though, that she believes the government is on top of the situation, especially given the suddenness of the crisis.

"The way it happened, it would have taken any government by surprise, even the most sophisticated government," she said. "They are, within the fact that it caught all of us by surprise, doing a good job."

The government's closing of all schools and most public venues has caused a major change in daily life throughout the nation.

In Mexico City, officials shut down all bars, theaters and public gathering places and have limited restaurants to takeout orders. About 35,000 businesses have been affected.

Many parents with school-age children have had to find someone to take care of them. Ackerman was dropping off his 1- and 5-year-old daughters at their grandmother's house Wednesday when a reporter called.

"Parents have to still attend to their jobs," he said.

At home, there's a different problem. "The kids are closed up watching TV all day," he said. "They're getting cabin fever. It's no fun."

Salazar, who has a 2-year-old daughter, has the same problem: stuck inside with no place to go. But she still has to go to TV and radio studios for her programs. She disinfects microphones and telephones and uses her own makeup for TV appearances.

Garrido, a car loan officer, is trying to stay home as much as possible.

"Yes, I don't go out," he said. "I take the necessary steps not to go out. I buy in big enough quantities so I don't have to go out."

And when he does go out, he's confronted with the reality of how scared people are to be in public. He went to a restaurant to discuss business and have coffee with someone Tuesday. The restaurant has 80 or 90 tables, Garrido said. Only six or seven had people sitting at them.

Ackerman is taking a similar approach.

"I'm trying to be careful. Just keep inside and wait it out," he said.

But there are still anxiety-producing moments.

"Yesterday, I had to go to a hospital for a routine test for our baby," he said. "That was a bit nerve-wracking."

Still, he's trying to keep everything in perspective. He compares what he's going through with worse disasters.

"It's not like the SARS crisis, where three out of four people [who contracted it] passed away," he said.

An outbreak of Severe Acute Respiratory Syndrome in 2003 killed 774 people worldwide, including around 300 in Hong Kong.

Arts teacher Katie Flowers, who has lived in Hong Kong for 18 years, said she knows what folks in Mexico are going through. She remembers how she struggled with her fears while trying to remain rational.

"We were very mystified," she said.

Later, she said, "a guy on the island had some kind of flu and we just all panicked."

And keeping her children safe was always a concern.

"We would always have millions of tissues and would be telling our children to wash their hands after they sneeze," Flowers recalled.

Six years later, she has a more tranquil perspective.

"You know what? Everything was fine," she said.