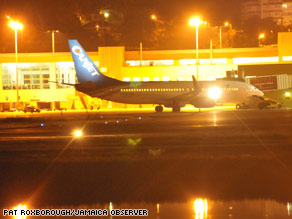 The crew members were not harmed, Vaz said.

The hijacking suspect, described as a "mentally challenged" man in his 20s, had demanded that the Boeing 737 be flown to Cuba. The military captured him around 7 a.m. local time.

The CanJet flight from Halifax, Canada, had made a scheduled landing at Sangster International Airport in the Jamaican resort city of Montego Bay and was scheduled to continue to Santa Clara, Cuba.

Canadian Prime Minister Stephen Harper, who was in Jamaica, told reporters that he planned to travel to Montego Bay to meet with Jamaican Prime Minister Bruce Golding. Harper has been following the airplane security breach and may meet with the plane's crew later today.

"The hijacking is that from a mentally challenged youngster and not anything that would be of concern in terms of an international incident," Vaz said.

The suspect gained access to the plane Sunday night through the terminal in "a breach of security" that "will be investigated," Deputy Police Commissioner Owen Ellington told CNN.

The gunman fired a shot in the boarding bridge as he entered, said CanJet Airlines Vice President Kent Woodside. No one was hit.

CanJet Flight 918 was carrying 174 passengers and eight crew members, Woodside said. All the passengers were Canadian, he said.

Two of the six crew members who remained inside the plane Monday locked themselves in the cockpit, Vaz said.

The suspect's father and Golding, who flew in by helicopter, were among those who negotiated with the gunman before his capture. The country's minister of national security also was at hand.

The released passengers were taken to a hotel, and the airport was shut down for a time, Vaz said.

The airport reopened shortly after the standoff, Woodside said. A CanJet airliner was on its way to Jamaica, he said, to take passengers on to Cuba or back to Canada.

Christian Gosselin, a passenger on the flight, told his father that the gunman demanded cash from the plane's occupants. Vaz confirmed the account.

"The guy wanted to have all their money," said Gosselin's father, Alphonse. "He [my son] told his girlfriend to take all the money and just take her passport and credit card and put it in her back pocket."

Christian Gosselin was part of a 25-person wedding party headed to Cuba. He and his girlfriend were released by the hostage-taker, and they spoke to his father in New Brunswick, Canada, while waiting for another flight.

"I didn't ask them too many questions; I was more concerned for their safety," the father said. "They were a bit shaken up. It was quite an experience."

Another passenger, Brenda Grenier, called her husband and said the man apparently got aboard the plane as airport workers were loading bags.

Grenier and her daughter were safe, her husband said by phone from his home in Nova Scotia, Canada.

All About Jamaica • Canada • Montego Bay