(CNN) -- After almost 3,000 miles of rowing, bouts of seasickness, equipment failure and salt sores, Paul Ridley is back on land. 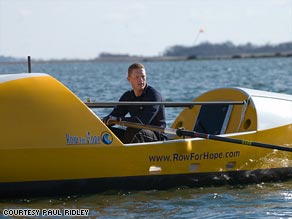 Paul Ridley trained for months before embarking on his solo rowing trip across the Atlantic Ocean.

On day 88, Ridley, 25, completed his solo rowing trip across the Atlantic Ocean, becoming the youngest American ever to do so.

"I'm exhausted. Overwhelmed with all the excitement from my arrival," Ridley told CNN.

"Physically feeling good but will be feeling a lot better when the soreness starts to heal and once that happens I will be back to fundraising because cancer research is still in need of funding, so we still have a lot of work to do."

For nearly three months, Ridley has been rowing up to twelve hours a day on the 2,950-mile journey to raise cancer awareness and hopefully raise money for cancer research. His organization "Row for Hope" was inspired by the death of his mother from skin cancer in 2001.

He set out from the Canary Islands off the north African coast in his 19-foot boat on January 1; he landed on the Caribbean island of Antigua at 2:30 p.m. on March 29.

"It was incredible," he said."The whole Island of Antigua came out to greet me. The harbor was swarming with boats. A big crowd on dry land. It's really been an amazing reception."

Only 85 people have attempted the nearly 3,000 miles east-to-west crossing, according to the Ocean Rowing Society International, but most failed.

"I'm definitely suffering from exposure to the elements and I've lost 20 pounds. This is definitely different from my life at home." Ridley told CNN this week before hitting land.

Ridley is the youngest -- and only third American -- to complete the voyage by rowing.

Dedicating the trip to the memory of his mother, Ridley's goal was to cross the Atlantic Ocean with only oars and raise $500,000 for research at the Yale Cancer Center. While he arrived at his destination, he still has to raise $400,000 to meet his goal.

After their mother died, Ridley and his sister Joy Ridley created Row for Hope, a fundraising effort in memory of their mother.

"I was a rower at Colgate University. I love the sport. I'm not a scientist, but I can row," he said.

The project has been three years in the making. For two of those, Ridley worked with a rowing coach and nutritionist. Beginning in March 2008, he trained by rowing up to 10 hours a day, every day. He put on an extra 15 pounds, knowing he would lose weight during the crossing.

He and his sister spent $60,000 of their own savings to have his boat custom built, and he took a leave of absence from his financial services job.

There was no support vessel following in his wake, and his food was largely the same freeze-dried variety as astronauts eat in space. Ridley's sister and fellow fundraisers tracked his progress via GPS navigation devices and kept in touch via a satellite phone.

"I have electricity from a solar-powered electrical system which is how I power the computer and also the satellite phone," he explained. "That keeps me connected back home and is one of the real mental pick-me-ups I have out here."

Out in the ocean, even when he rested his arms, his fingers were busy documenting his adventure on his blog, transmitted over satellite phone.

"My hands may be blistered, my seat is sore but I love the journey," he wrote.

The courage to confront and even embrace his discomfort and the danger from winter ocean weather comes from his mother Katherine. "Her fight was courageous but short," Paul said. "After she was gone I remember wondering how anyone ever moves on from that kind of loss."

But even once on land, this journey is not over. In fact, it's just the beginning of a bigger expedition.

"We'd like to keep Row for Hope alive to support other athletes who want to take on similar adventures for cancer research," he said. "We've learned a lot in the last several years, and we've set up the framework for other people to use. Basically, we want to help people use their big dreams to create big change in the fight against cancer."

All About Atlantic Ocean • Cancer