MEXICO CITY, Mexico (CNN) -- The Mexican army has arrested a top drug cartel chief and four of his bodyguards, the government announced Wednesday. 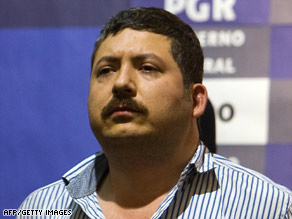 Hector Huerta Rios, also known as "La Burra" or "El Junior," was arrested Tuesday in the city of San Pedro Garza Garcia in Nuevo Leon state, along Mexico's border with the United States. The state-run Notimex news agency reported the announcement, citing a news conference held by the secretary of national defense and the attorney general's office.

Huerta was flown to Mexico City on Tuesday night to face federal charges.

Federal officials showed the four suspects to the media in a news conference Wednesday. Video footage on CNN affiliate Televisa shows Huerta flanked on each side by two other suspects. He is looking straight ahead, a solemn countenance on his mustachioed face. Hooded soldiers are stationed to the sides and behind the suspects.

Huerta is a suspect in the September 2006 shooting death of Marcelo Garza y Garza, the head of the State Agency of Investigations, news reports said.

Huerta's arrest came one day after Mexican authorities announced rewards of up to $2 million for information leading to the capture of top cartel operatives.

Huerta, considered by authorities as the principal operator for the Beltran-Leyva cartel in northern Mexico, was on the government's list. The reward for his capture was 15 million pesos ($1 million).

His arrest resulted from intelligence operations though, and not from a tip, so officials will not pay a reward, El Porvenir reported, citing a military official.

During the arrest, officials confiscated 12 cars and four weapons, one of them gold-plated, El Milenio reported.

Huerta's capture was the third major arrest announced in the past week.

Authorities on both sides of the U.S.-Mexico border blame drug cartels for a surge in violence in the region.

On Tuesday, the Mexican attorney general's office said 10,475 people were killed since Calderon took office in December 2006. Nearly 10 percent of those were police.

U.S. Secretary of State Hillary Clinton will visit Mexico on Wednesday for two days of meetings with top officials, with the drug war heading the list of topics to be discussed.

Clinton will make clear the United States is committed to working with Mexico and helping it come out of the drug war stronger, aides said.

The Obama administration announced Tuesday it is sending hundreds of extra federal agents and crime-fighting equipment to the border with Mexico.

The plan, developed by the departments of Justice and Homeland Security, calls for doubling the number of border security task force teams as well as moving other federal agents, equipment and resources to the border.