(CNN) -- Nearly 7,000 Mexican soldiers and federal police arrived in the U.S.-Mexico border city of Ciudad Juarez this week to restore security to a city plagued by a long-standing, bloody drug war. 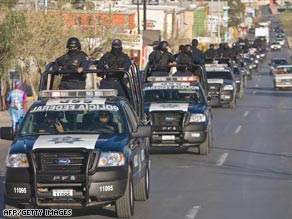 Another 1,500 soldiers are expected to join the 3,500 that rolled into Juarez earlier this week to support municipal police in street patrols and ultimately take control of their operations, Torres said.

In addition to the army troops, about 3,000 federal agents arrived to carry out investigations Torres likened to those of the FBI in the United States.

"They'll stay as long as necessary," Torres said, in the city across the border from El Paso, Texas.

And this week, the U.S. Consulate in Juarez specifically warned Americans to avoid an area southeast of the city.

"There has been a dramatic increase in drug related violence in the Guadalupe Bravo area and there is no indication that the situation will improve in the near future," the consulate said on its Web site.

Watch how drug killings are making Americans wary of Mexico »

Surveillance cameras will be installed throughout the city to help police stem executions and assassinations in the streets, scene of many of Juarez's 1,600 killings in 2008.

Police advised residents to carry identification with them at all times to ensure that encounters with law enforcement in the streets and at vehicle checkpoints proceed as quickly as possible, Torres said.

"It's necessary to keep the peace," Torres said in a telephone interview as he sat in his car, waiting in line at a police checkpoint. "For me, it's safe. If there are more soldiers, I feel safe."

But human rights advocates say the military presence creates a police state in a region where confidence in law enforcement is low.

"The increase in law enforcement brings elements that create an environment conducive to the violation of human rights," said José Luis Armendáriz González, president of the Chihuahua State Commission of Human Rights. "What are the limits of their power? The risk for wrongful detentions, raids of homes increases when there's no clear line."

Armendáriz said the focus on troop numbers detracts from improving the quality of investigation and crime-fighting techniques.

"We've been battling the criminal elements with force and gunfire for years now with few results," he said. "I believe it's necessary to pass to a second phase that focuses on intelligence and infiltrating the criminal organization to hit all levels."

Others say the stronger law enforcement presence is producing results.

"In the last seven days, we've had no more than five reported deaths. Before that, the average was six a day," Sen. Ramón Galindo Noriega said in an interview Wednesday.

"Maybe it's a coincidence, but I believe the presence has generated an environment of greater security and this is congruent with the numbers that we have this week."

Galindo, a lifelong Juarense who sends his children to schools in Juarez and owns businesses there, said more troops are the only answer to a problem that has transformed Juarez from a center of industry and commerce to a major battleground in the war among drug cartels.

"What we had before was a state that was under the control of crime. It was a state that didn't permit a normal life. People left, businesses closed. There was fear in the streets, an environment of fear that we had to take radical measures to eradicate," he said.

"I believe the people are content with the presence of the army. They feel safer in the city, calmer in the streets."