SAN JUAN, Puerto Rico (CNN) -- Puerto Rico's Gov. Luis Fortuno on Tuesday outlined a plan that would cut spending by $2 billion per year and slash government payrolls by what could be more than 30,000 workers, or 10 percent of the government's work force. 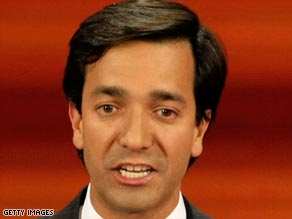 "It's up to us to confront the bitter reality that the government is bankrupt," Gov. Luis Fortuno said Tuesday.

"It's up to us to confront the bitter reality that the government is bankrupt," he said in a televised address.

The number of laid-off workers will depend on how many accept voluntary buyouts and how many agree to cut their hours, he said.

"But I am frank," he said. "The quantity could be significant and I fear they could exceed 30,000 workers."

Though he did not lay out a timetable, Fortuno prefaced his prediction by calling for "immediate action" to emerge from a crisis that has left the government unable to pay its bills.

The situation is dire, he said. "Imagine that in June, the government stopped paying the light bill," he said. "Or the water and phone."

Failure to take quick action, he predicted, could delay recovery by a decade. "Simply put, I am not going to permit it," he said.

He said since entering office two months ago, he discovered the fiscal deficit is four times greater than what he had been told -- or more than $3.2 billion, which translates into the highest per capita deficit figure in the nation.

Failure to take immediate action would result in an unemployment rate above 10 percent in two years, he added.

To achieve his "reconstruction plan," Fortuno said he was sending the Legislative Assembly proposals to inject money into the economy through public works and to resolve the fiscal crisis "that has broken the government."

In addition to the $5 billion that Puerto Rico is to receive under the federal stimulus plan, Fortuno said he was submitting to the legislative assembly a plan for $500 million to provide benefits, carry out public works projects and create jobs.

A stimulus package would invest $180 million to guarantee loans to small- and medium-sized businesses, he said.

An additional $142.5 million would be for public works projects in the cities -- $100 million of which would go directly to mayors, he said.

More than 5,000 families that risk losing their homes because of lost jobs or lost income of 20 percent or more would be eligible for a program to reduce their monthly payments -- either by lowering their mortgage interest rates or lengthening the term of their loans, he said.

"Public-private alliances" will help ensure Puerto Rico's port and highways have the money they need to keep working, he said.

Fortuno said he would work to avoid increasing taxes on items that disproportionately affect the middle class, like gasoline and cellular phones.

The only permanent tax increase will be levied on cigarettes, wine and beer, he said.

"Simply put, the government has to shrink," he said. "I know that this plan is painful, but we have no alternative."

Some union representatives said the plan was gruesome and called for a series of protests this week. Most of the syndicates had negotiated collective agreements with the former governor. Fortuno argued that those agreements may not be honored since the agencies that negotiated them failed to identify where the money was to come from.

All About Puerto Rico • Jobs and Labor