Mexico drug fighter killed after less than a day on job 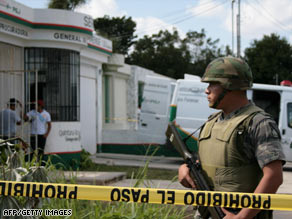 A soldier guards the forensics office where the body of a slain former general was taken in Cancun, Mexico.

Retired Gen. Mauro Enrique Tello Quiñonez, his aide and a driver were tortured before being killed, said Quintana Roo state prosecutor Bello Melchor Rodriguez y Carrillo. He said there was no doubt Tello and the others were victims of organized crime.

"The general was the most mistreated," Rodriguez said at a Tuesday night news conference monitored by El Universal newspaper. "He had burns on his skin and bones in his hands and wrists were broken."

Tello had just been appointed a special drug-fighting consultant for Gregorio Sanchez Martinez, the mayor of the Benito Juarez municipality, which includes the city of Cancun. Tello, who retired from the army in January at the mandatory age of 63, had moved to the resort area three weeks ago.

The three victims were found inside a white Toyota pickup truck outside of Cancun on the road to Merida.

The three men were abducted Monday night, possibly in Cancun, tortured and then later shot to death, El Universal said, citing prosecutor Rodriguez. The bodies were found with their hands bound, the newspaper said.

The killings happened around 4 a.m., the prosecutor said.

The other two victims were identified as Lt. Julio Cesar Roman Zuniga, who was Tello's aide and the chief bodyguard for Mayor Martínez, and civilian driver Juan Ramirez Sanchez.

Tello is the second high-ranking army officer to be killed in the area in the past few years. Lt. Col. Wilfrido Flores Saucedo and his aide were gunned down on a Cancun street in 2006. That crime remains unsolved.

The killings come as Mexico grapples with the highest violent-death rates in its history -- around 5,400 slayings in 2008, more than double the 2,477 reported in 2007, according to Attorney General Eduardo Medina Mora.

Former U.S. House Speaker Newt Gingrich has characterized the battle among drug cartels and with government authorities as a "civil war."

On Tuesday, 12 men were gunned down in Chihuahua state in northern Mexico, Excelsior reported Wednesday. Eight other people were shot and killed in Chihuahua last weekend.

More than 200 people have been killed this year in Ciudad Juarez, the largest city in Chihuahua and considered the most violent town in Mexico, El Tiempo newspaper said, citing local authorities.

Last year, according to the National Commission on Human Rights, there were 1,900 organized crime killings in the state of Chihuahua. About 1,600 of those slayings occurred in Ciudad Juarez.