ISLAMABAD, Pakistan (CNN) -- Muhammad Saad Iqbal is a free man after serving more than six years at the U.S. military's detention facility at Guantanamo Bay, Cuba -- without any charge. 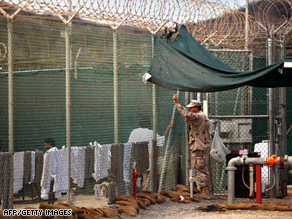 A guard talks to a Guantanamo detainee, inside the open yard at Camp 4 detention center, this week.

"I am angry in my heart," Iqbal said in a recent interview. "It's easy for the U.S. government to say, 'There are no charges found and he's free.'

"But who will be responsible for seven years of my life?"

His attorney in Washington, Richard Cys, said he is considering a lawsuit against the U.S. government, on behalf of Iqbal, but the details of the suit have not been worked out.

Cys said he is waiting for the outcome of a habeas corpus petition, which "could be a vehicle for future lawsuit."

"We may well have claims arising from our habeas action, but we're still not sure what path we're going to pursue," he said.

It would not be the first lawsuit brought against the U.S. government by a former Guantanamo detainee.

President Obama signed an executive order Thursday to close the camp within a year.

The move could lead to an increase in the number of lawsuits brought by former detainees who -- like Iqbal -- say they were held for no reason.

A former Gitmo detainee talks about his experiences »

The Pakistani citizen was taken into U.S. custody in January 2002 while visiting family in Indonesia. He reportedly was arrested after talking about making a shoe bomb, something he denies.

"I never [made] that statement," Iqbal said. "But they have [said] a lot of things, like I went to Afghanistan, but they have no proof."

Iqbal says while in U.S. custody, he was taken to Egypt, then to Bagram Air Base in Afghanistan. In March 2003, he arrived at Guantanamo's military prison, which became a lightning rod for critics who charged that the Bush administration had used torture on terror detainees.

Iqbal accuses his handlers in Guantanamo of beating him during his six-month hunger strike and withholding medical treatment until he agreed to cooperate.

"Even when they take me to hospital, I can't even walk but they put me in 4-by-4 [cell], my hands tied with handcuffs and my legs also had leg shackles," he said.

The CIA and Pentagon repeatedly have denied allegations of mistreatment and torture, saying all interrogation was lawfully done. In response to Iqbal's allegations, CIA spokesman Paul Gimigliano told The New York Times this month, "I have no idea what he's talking about."

Six months after he was admitted to Guantanamo, Iqbal said he tried to kill himself. While no one watched, Iqbal said he and several inmates tried to hang themselves with bedsheets.

Four of the prisoners died, according to Iqbal. But his survival continued what he calls the theft of his freedom by the U.S. government.

Former President Bush and other senior officials have repeatedly denied that the U.S. government used torture to extract intelligence from terror suspects.

Obama issued three executive orders Thursday designed to show a clean break from the Bush administration on the war on terror. One ordered the closure of the Guantanamo Bay facility within a year.

The third establishes an inter-agency task force to lead a systematic review of detention policies and procedures and a review of all individual cases.

Iqbal was among nearly 800 inmates who came through Guantanamo Bay, classified by Washington as suspected terrorists. Most were never charged with a crime.

With the help of a U.S.-based lawyer, Iqbal was released in September without ever being charged. He returned to Pakistan, walking with the help of a cane, complaining of back pain, a bad leg and a torn eardrum -- all the result, he says, of his time in custody.

Not once during those nearly seven years in custody did anyone tell him why he was being held.

All they told him, according to Iqbal, was that they were sent "by the U.S. government [in] Washington, D.C., by [the] CIA, to interrogate you if you have any information about terrorists or terrorism."

Despite his anger and his physical ailments, Iqbal says he "was born again and given a new life from God" after his release. He is demanding justice for what he says was his unlawful detention -- but not through violent means.

"We have to convey that Islam is a peace[ful] religion and we [do] not hate anybody," he said.

CNN's Ed Henry and Barbara Starr contributed to this report.