LA PAZ, Bolivia (CNN) -- Bolivian officials have declared a health emergency after three deaths attributed to dengue hemorrhagic fever, the often-lethal form of a mosquito-borne disease that more than 1,000 Bolivians are thought to have contracted since November. 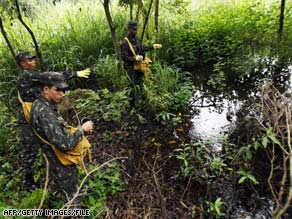 At least 12 unconfirmed instances of dengue hemorrhagic fever have been reported in the first 17 days of 2009, the official ABI news agency said.

About 250 cases of dengue fever, the milder, nonlethal form of the disease, have been confirmed in the past two weeks, said Health Minister Ramiro Tapia in the Los Tiempos de Cochabamba newspaper.

Authorities said they have committed more than 20,000 military personnel and 2.5 tons of insecticide to combat the disease.

"By that time, there was nothing we could do. He had multiple internal hemorrhages," Fuentes said.

Cases of dengue fever usually spike from November through January, which is Bolivia's hot and rainy season. Alberto Nogales, the country's vice minister of health, said the fight against mosquitoes will last until April.

Dengue occurs in tropical and subtropical parts of the world, transmitted by the bite of a mosquito infected with one of four dengue viruses, the World Health Organization says.

Symptoms, which appear three to 14 days after the bite, can include mild to high fever, severe headache, pain behind the eyes, muscle and joint pain and a rash, the WHO says.

Dengue hemorrhagic fever is a potentially fatal complication that affects mainly children, the WHO says. Symptoms include fever, abdominal pain, vomiting and bleeding.

The disease cannot be transmitted directly from one person to another.

The Centers for Disease Control and Prevention estimates there are up to 100 million cases worldwide each year.

"It actually is quite common," Dr. Ali Khan of the CDC told CNN last year. "And unfortunately, over the last 30 years or so we've seen an increase in the number of countries infected with dengue fever."

Khan attributes the increase in part to population growth. Mosquitoes that carry dengue typically breed in areas near humans.

"This is a disease that occurs where there's lots of population," he said.

The WHO says mosquitoes carrying dengue viruses breed in exposed water, including places as shallow as jars, discarded bottles and plant saucers.

Last year, 55,000 people in southeastern Brazil contracted the disease. The outbreak was confirmed as causing the deaths of at least 67 people -- almost half of them children under 13 -- and another 58 deaths were under investigation last summer, the Rio de Janeiro state's ministry of health reported at the time. Final statistics on the outbreak were not immediately available.