(CNN) -- Venezuela announced Wednesday it is breaking diplomatic relations with Israel over the conflict in Gaza, joining Bolivia, which did the same thing earlier in the day. 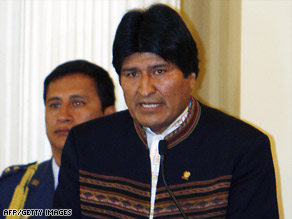 In the announcement issued by the Venezuelan Foreign Ministry, the government cited "the gravity of the atrocities against the Palestinian people."

The statement accused the Israelis of having "ignored, systematically, calls from the United Nations, violating in a repeated and shameless manner the resolutions approved by the overwhelming majority of their members and placing themselves ever more on the margin of international law."

It described "19 days of continuous bombardment, the assassination of more than 1,000 people and the destruction of the infrastructure of the population of Gaza," calling it "a human catastrophe that is unraveling before the eyes of the entire world."

It further accused Israel of participating in "state terrorism" against "the most weak and innocent human beings: children, women and the aged."

The statement called for Israeli leaders be tried before an international court for crimes against humanity.

The move is a ratcheting up of tensions between the two countries that have simmered since January 6, when Venezuelan President Hugo Chavez expelled the Israeli ambassador from Caracas.

More than 1,000 Palestinians have been killed and nearly 5,000 wounded in the Israeli military operation, which started December 27, Palestinian officials said Wednesday.

Israel said Wednesday that 10 of its soldiers and three civilians have been killed and more than 100 soldiers have been wounded.

Israel, which did not immediately respond to the diplomatic moves, has defended its actions in Gaza as a response to years of shelling into its territory from Hamas.

Gloria Carrasco contributed to this report.