LOS ANGELES, California (CNN) -- Gertrude Baines, a 114-year-old California resident, will likely be crowned the world's oldest woman, according to the organization that keeps track of such honors. 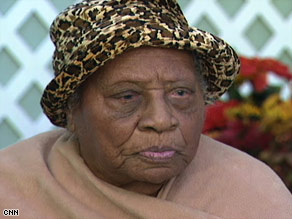 Gertrude Baines told CNN two years ago that she has taken good care of herself, "the way (God) wanted me to."

The previous oldest woman was Maria de Jesus, who died this week in Portugal at age 115, Guinness World Records said.

Baines -- born to former slaves in a small town south of Atlanta, Georgia, in 1894 -- now lives in a Los Angeles nursing home.

Baines appeared cheerful and talkative when the Los Angeles Times interviewed her in November as she cast her vote for Barack Obama for president, whom she said she supported because "he's for the colored people."

"I'm glad we're getting a colored man in there," she said.

Baines apparently prefers using the older term for her race. She was well into her 70s when "African-American" became the common reference in the United States. Watch Baines speak to CNN

She told the Times she spends most of her time "doing nothing but eating and sleeping."

When CNN interviewed Baines two years ago, she was asked to explain why she thought she has lived so long.

"God. Ask him. I took good care of myself, the way he wanted me to," Baines said.

Her only child, a daughter, died of typhoid fever at age 18.

Much of her long life was lived in Ohio, where she worked as a "house mom" at a state university. She eventually divorced and traveled to Los Angeles, where she retired.

Baines will not officially be given the title until after Guinness World Records completes an investigation, the organization said.

"Maria was crowned the world's Oldest Living Woman by Guinness World Records on 28 December upon the death of Edna Parker," the group said.

All About Guinness World Records Ltd. • Aging and the Elderly