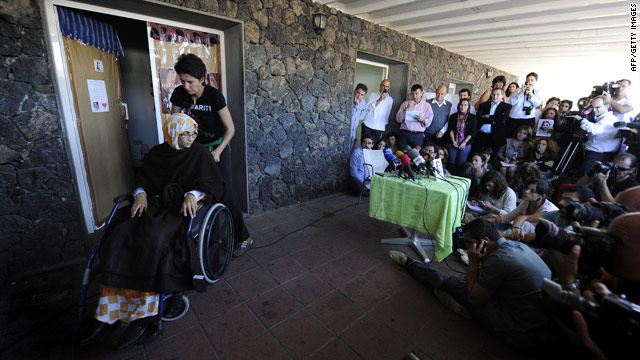 Haidar told reporters she would return to Western Sahara "with or without a passport, alive or dead."
STORY HIGHLIGHTS
RELATED TOPICS

Madrid, Spain (CNN) -- An award-winning Western Sahara independence activist on the 25th day of her hunger strike at a Spanish airport said Thursday she wants to return home to live with her family, "but in dignity."

Aminatou Haidar, 43, demands to return to Western Sahara, a former Spanish colony, without having to acknowledge Moroccan sovereignty over it.

At a news conference Thursday, she said the Spanish government is holding her "illegally" at the airport and "has not done enough" to unblock a diplomatic impasse with Morocco over her case.

"My demand is to return to Western Sahara, to hug my children and to live with them and my mother, but in dignity," Haidar said in a statement read by a supporter at the start of the news conference, which was nationally televised in Spain.

Haidar, seated nearby in a wheelchair, then responded to questions, telling reporters that she wants to return to Western Sahara, "with or without a passport, alive or dead."

Speaking on the United Nations Human Rights Day 2009, Haidar said her human rights were not being respected.

She arrived at the airport on Lanzarote, in Spain's Canary Islands, on November 14, shortly after Moroccan authorities took her passport and refused her entry at El Aaiun airport in Western Sahara.

She began her hunger strike November 16.

Since then, Madrid has offered her Spanish citizenship or political asylum, but she declined.

In an earlier statement emailed to reporters, Haidar thanked Spain but said, "I do not plan on requesting Spanish, American or Italian citizenship. I live under Moroccan occupation and I advocate, as do the rest of the Saharawi people, for our self-determination."

Spain formally withdrew as the decades-long colonial power in Western Sahara early in 1976, shortly after the Moroccan king led a "green march" with 350,000 Moroccan civilians into the territory to lay claim to it.

A guerrilla war with the Polisario Front -- a group made up of mostly Saharawis, which favors Western Sahara independence -- ensued and was finally halted, after more than a decade, in 1991, through a United Nations-brokered cease-fire, according to the CIA World Factbook.

A U.N.-organized referendum on the territory's final status has been repeatedly postponed. Morocco has presented an autonomy plan to the U.N. but the Polisario countered with an independence plan for the territory's 405,000 people, who are Muslims of Arab or Berber descent.

The Robert F. Kennedy Center for Justice and Human Rights in Washington, D.C., which last year awarded Haidar a human rights laureate, released on her behalf her statement rejecting Spain's offer of citizenship.

Haidar was recently in New York to receive another award, the Train Foundation's Civil Courage Prize for 2009, just before she flew to Western Sahara and was refused entry in November, a foundation spokeswoman, Barbara Becker, told CNN.

But a senior Moroccan government official, Khalihenna Ould Errachid, told CNN partner station CNN+ in an interview that Haidar "has always been Moroccan. She was never a part of the ex-Spanish Sahara, and I say that Aminatou Haidar should return to her Moroccan nationality and say it clearly, and tomorrow she can return, without problem."

A Spanish judge visited Haidar at the airport Sunday with a court doctor, who checked her vital signs.

There is an open debate among Spanish officials about whether to force feed her if her physical condition further deteriorates. Haidar said Thursday she opposes forced feeding, adding that, "no one can feed me against my will."

Her lawyer has threatened to take legal steps to block such a move.

Haidar is staying in a small room in a building between the two main terminals at Lanzarote's airport, said a CNN+ reporter on the scene.

She is helped by numerous supporters, and leaves the room occasionally in a wheelchair to go next door to the bathroom.