Why is Uganda attacking homosexuality? 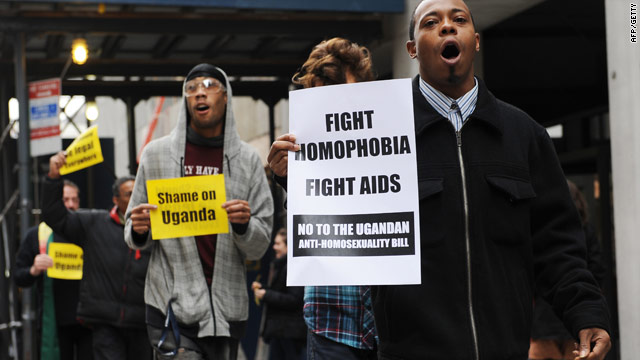 Protesters against a planned anti-homosexuality bill in front of the Ugandan Mission to the U.N. in New York on November 19.
STORY HIGHLIGHTS
RELATED TOPICS

(CNN) -- As a gay man in Uganda, Frank Mugisha is used to the taunts, the slurs and the daily harassment of neighbors and friends.

But if a new bill proposed in the east African country becomes law, Mugisha could be put away for life, or worse, put to death for having sex with another man.

"Right now, you can't go to places that are crowded, because the mob can attack us or even burn us. We can't walk alone. We are ostracized by relatives. But if this bill passes, it will become impossible for me to live here at all. And that part hurts the most," Mugisha said.

The Anti-Homosexuality Bill features several provisions that human rights groups say would spur a witch hunt of homosexuals in the country:

• Gays and lesbians convicted of having gay sex would be sentenced, at minimum, to life in prison

• People who test positive for HIV may be executed

• Homosexuals who have sex with a minor, or engage in homosexual sex more than once, may also receive the death penalty

• The bill forbids the "promotion of homosexuality," which in effect bans organizations working in HIV and AIDS prevention

"Who will go to HIV testing if he knows that he will suffer the death sentence?" Elizabeth Mataka, the U.N. Special Envoy on AIDS in Africa, told reporters last week. "The law will drive them away from seeking counseling and testing services."

Homosexuality is already illegal in Uganda under colonial-era laws. But the bill, introduced in October, is intended to put more teeth into prosecuting violators.

It applies even to Ugandans participating in same-sex acts in countries where such behavior is legal.

"They are supposed to be brought back to Uganda and convicted here. The government is putting homosexuality on the level of treason," Mugisha said.

Lawmakers have indicated that they will pass the bill before year's end.

It has the blessing of many religious leaders -- Muslim and Christian -- in a country where a July poll found 95 percent opposed to legalizing homosexuality.

The Rev. Esau Omara, a senior church leader, said over the weekend that any lawmaker opposing the bill will pay for it during the next election, according to local newspaper reports.

And a leading Muslim cleric, Sheikh Ramathan Shaban Mubajje, has called for gays to be rounded up and banished to an island until they die.

Who will go to HIV testing if he knows that he will suffer the death sentence?
--Elizabeth Mataka

In April, the Observer newspaper published tips to help readers spot homosexuals. And over the summer, the Red Pepper tabloid outed 45 gays and lesbians.

Uganda's President Yoweri Museveni has not publicly stated his position on the bill, but last month blamed foreign influence in promoting and funding homosexuality.

"It is true that, if the president has said that, he must have information that European nations are promoting (homosexuality) and recruiting homosexuals," government spokesman Fred Opolot said. "You must note that the president or the legislators are responding to the concern of the citizenry of the country."

At the Commonwealth summit in Trinidad and Tobago late last month, Canadian Prime Minister Stephen Harper said he pulled aside Museveni to deplore the bill.

"We find them inconsistent with, frankly, I think any reasonable understanding of human rights, and I was very clear on that with the president of Uganda," Harper told reporters.

In the United States, a coalition of Christian leaders released a statement Monday denouncing the bill.

"Regardless of the diverse theological views of our religious traditions regarding the morality of homosexuality, in our churches, communities and families, we seek to embrace our gay and lesbian brothers and sisters as God's children, worthy of respect and love," the statement read.

Human rights groups have called on Western nations to withhold aid from Uganda if the measure passes. About 40 percent of the country's budget comes from international aid.

"This draft bill is clearly an attempt to divide and weaken civil society by striking at one of its most marginalized groups," said Scott Long, director of the Lesbian, Gay, Bisexual and Transgender Rights Program at the New York-based Human Rights Watch. "The government may be starting here, but who will be next?"

Opolot, the government spokesman, said consideration of the bill in parliament is merely "democracy at work."

"We as a country are engaging and debating a pertinent issue," he said. "So if a foreign country chooses to cut aid simply because Uganda is debating its destiny, then it is quite outrageous and quite wrong."

Mugisha, who now heads the group Sexual Minority of Uganda, said he is working with lawyers and other activists to change minds and defeat the measure.

"I have put a lot of effort in this struggle. I just want to live freely every day," he said. "I want to be happy knowing that if I'm going to meet someone, I'm not going to be taken to jail forever."