Baby gorillas in Congo getting a new playpen: Paradise 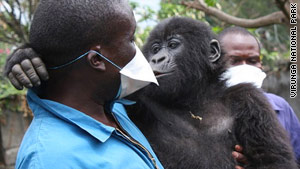 (CNN) -- The only two baby mountain gorillas in captivity -- orphaned two years ago after their mothers were slain in massacres -- will soon be getting a lush, new playpen, Congo's wildlife authority announced Friday.

Ndeze and Ndakasi will be romping in a special sanctuary, the Senkwekwe Center now under construction in Virunga National Park, where about 200 of the world's remaining 700 mountain gorillas live.

"This is paradise for them," said Samantha Newport, the park's communications director. "They will be able to play around, climb trees and eat forest food."

Authorities began building the center in July 2007 but had to stop work after rebels invaded the park during the long-running civil war that raged in the Democratic Republic of Congo.

Work resumed in September as hostilities subsided. The center is expected to be ready for occupancy by March.

The babies were found in 2007 when they were 2 months old, one on her slain mother and the other on the back of her brother, who was alive when the baby was found.

Authorities don't know who killed the mothers, but they suspect that the perpetrators were those engaging in the park's illegal charcoal industry, in which people cut down trees for fuel so they can cook and boil water.

Newport said park rangers who found the babies hustled them out of the park to the city of Goma, where they have been living on a site with a house and trees.

"If they had not been taken out of the wild, they would have died," she said.

Newport doesn't know whether the two will be moved out of the center and into the wild when they get older.

The Senkwekwe Center is a 2.5-acre plot of forest three miles from the mountain gorilla habitat in Virunga.

Emmanuel de Merode, director of Virunga National Park, said that along with sheltering the baby gorillas, the center offers "a unique opportunity to enable the local population to see gorillas, and provides a launch pad for the veterinary activities that are conducted throughout Virunga."

The center will have a 40-by-40-meter interior holding facility, visitation platforms, an education center and veterinary facilities. The wildlife authority is raising $100,000 for the completion of the center, and donations will be matched by the United Nations Foundation.

Gorillas have been caught in the middle of the civil warfare in recent years, and fighters had occupied large swaths of the 8,000--square-kilometer park. The gorilla section is in a strategically important area near the borders of Rwanda and Uganda.