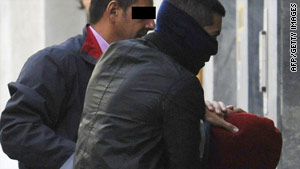 Spanish policemen escort to a juvenile court in Madrid an alleged pirate suspected of helping to seize the Alakrana.
STORY HIGHLIGHTS
RELATED TOPICS

Madrid, Spain (CNN) -- A Spanish judge would consider sending two Somali pirate suspects held in Madrid back to Africa, as demanded by pirates holding a Spanish fishing boat and its crew off the Somali coast, it was reported Friday.

Citing sources at the National Court, CNN partner station CNN+ reported Judge Santiago Pedraz would consider such a move if he's asked by prosecutors or by lawyers at Spain's Justice Ministry. Such a request hasn't yet occurred.

The news comes a day after the Spanish government confirmed that the pirates transferred three of the fishing boat's 36 crew members to land on Thursday.

Since then, relatives of some of the crew members have called Spanish media and held news conferences, demanding that the two pirate suspects -- captured by the Spanish military and transferred to Madrid -- be sent back to Africa.

On Friday, the ship's owner, Echebastar Fleet, also demanded that the two pirate suspects be allowed to leave Spain.

It is thought to be the first time that any of the crew -- 16 from Spain and 20 from Africa and Asia -- were removed from the ship -- the Alakrana -- that was captured October 2 in international waters off Somalia.

Spanish news media have reported that the three crew members moved to land are Spaniards, but Spanish Defense Minister Carme Chacon declined to identify their nationalities at a news conference on Thursday.

Chacon said Spanish authorities know where the three crew members are being held on land. "We know they are well," she added.

The two pirate suspects, identified as Raageggesey Hassan Haji and Cabdiweli Cabdullahi, were detained by the Spanish military a day after pirates captured the fishing boat.

The two pirate suspects had left the fishing boat in a small vessel heading toward land, authorities said, and the military swooped in to stop them on the high seas. They were later brought to Madrid, where a judge has charged them with piracy and kidnapping.

It is thought to be the first time suspected Somali pirates have appeared before a Spanish judge and been charged.

But relatives said they fear for the safety of the crew members and have urged the two pirate suspects be returned to Africa, possibly to Kenya, to face potential legal proceedings there, instead of in Madrid.

The government declined to publicy discuss if the pirates have set a deadline for the return of the pirate suspects from Madrid.

Pirates have captured more than 50 ships this year off Somalia and are currently holding 12, including the Alakrana, Chacon said.

She said Spain is working to bring home the hostages safe and sound, in concert with its allies, and that Spain is keeping all its options open regarding the Alakrana.

The Echebastar Fleet has said the Alakrana is the first of its ships to be captured by pirates, but there have been previous attempts on its ships.

A Spanish tuna fishing boat from another company was seized last year by Somali pirates and later released, after ransom reportedly was paid.

Spain is part of a European Union task force against piracy in the Indian Ocean off Somalia. The Spanish parliament last January agreed to increase Spain's presence with up to 395 troops and assets, including a frigate and aircraft.

Chacon told parliament before the vote that the fight against piracy "is of vital importance for the defense of the geostrategic and economic interests of Spain, and will provide security to our fishing fleet," according to a defense ministry statement.