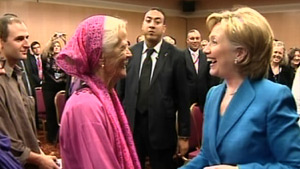 (CNN) -- U.S. Secretary of State Hillary Clinton Tuesday praised as "one of the best" the oldest Peace Corps volunteer in the world, an 85-year old Florida woman serving in Morocco.

Clinton recognized Muriel Johnston during a meet-and-greet session of U.S. Embassy officials and other Americans in Marrakech, Morocco. Clinton was representing the U.S. at an international conference in Morocco, during a trip that stretched from Pakistan to the Middle East.

"I have to recognize -- I just learned about this last night -- Muriel Johnston. Muriel? Stand up, Muriel," Clinton said to applause and cheers from Johnston's fellow Peace Corps workers and other Americans.

"And it's also a great reminder that in America in the 21st century, there are not only second acts, there's third acts and fourth acts and fifth acts and -- if you're ready to embrace new challenges," Clinton said.

Later, Clinton shook hands with Johnston and asked if she was enjoying herself.

"I'm having a wonderful time, " Johnston told the secretary.

Johnston is serving as a health worker in the Moroccan province of Azilal. She hails from New York but has lived in Sebastian, Florida, since 1992. Peace Corps headquarters in Washington confirmed that she is the oldest Peace Corps volunteer currently serving.

She is one of more than 7,600 Peace Corps volunteers at work in 75 countries.