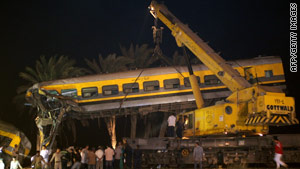 Rescuers search for survivors after a collision between two passenger trains south of Cairo.

Cairo, Egypt (CNN) -- Between 15 and 20 people died when two trains collided outside of Cairo, Egypt, Saturday night, and officials expect the death toll to rise, the country's Health Ministry said.

Another 40 to 50 people were injured when one train traveling from Cairo to Asyut crashed into a train en route from Giza to Fayyoum, Deputy to the Health Ministry Mohammed Sarhan told state-run Nile News TV.

The Fayyoum-bound train was stationary when it was struck in Al-Ayyat district, he said.

The wreck's location posed a problem for emergency personnel, Sarhan said, because the site is next to a water canal. Security forces used tree trunks and branches to create an ad-hoc bridge to reach the dead and injured.

People were still trapped beneath the wreckage late Saturday, reported Nile News TV. Some of the dead were found buried under the trains, Sarhan said.

Eighty ambulances were sent to the scene to transport the injured to local hospitals, said government spokesman Ahmed Rady in a statement.

The Transportation Ministry has ordered an investigation into the cause of the crash, Rady said. Government investigators are searching for the train's recorders, reported the country's official news agency, MENA.

Egyptian National Railways also launched an investigation into the collision of their trains, MENA said.

The governor of October 6th province ordered that families of the victims receive compensation, MENA reported. The Egyptian government has issued compensation to families of train crash fatalities and to those injured in crashes in the past.

Train disasters in Egypt over the last 12 years have killed hundreds.

More than 370 people died in February 2002 when a fire broke out near the rear of a passenger train en route to Luzzur from Cairo. At least 44 of those passengers died when they leapt from the burning cars while the train was still moving.