LAGOS, Nigeria (CNN) -- Nigeria has set its sights on making multibillion-dollar oil deals with China amid peace moves with militants. 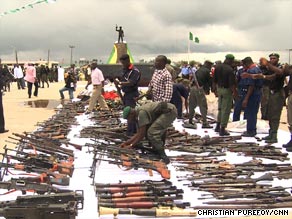 Hundreds of militants have laid down their weapons in exchange for a pardon and a job.

Lawmakers in the west African country -- one of the world's top producers of oil -- are crafting new money-making changes for its state oil corporation, as officials negotiate multibillion-dollar oil deals with China. At the same time, the government is brokering peace with bandits whose attacks have cost the oil industry millions.

Nigeria's minister for state of petroleum, Odein Ajumogobia, talked this month about the developments.

The changes aimed at the Nigerian National Petroleum Corporation will address allegations of corruption and mismanagement, he said.

"Some of the excesses we've seen in the industry are as a result of the lack of regulation," Ajumogobia said. "We are going to make sure that the petroleum directorate, for example, where the minister will reside, is going to be manned by professionals who understand the industry and have the experience."

The talks are part of China's oil-buying binge this year. Its government-controlled oil companies have closed or floated a slew of deals all over the world, including billion-dollar deals with Russian oil company Rosneft and Brazil's Petrobras.

The Nigerian minister offered few details about negotiations with China.

"There is no deal yet," he said. "We all know the appetite of the Chinese for energy -- a huge population and so on -- and they're looking for oil and Nigeria has a lot of it."

Oil bandits have plagued Nigeria for years, attacking pipelines and cutting production by over 1 million barrels of oil a day. But many of those attacks might end, thanks to a cease-fire with the militant group MEND, or the Movement for the Emancipation of the Niger Delta. The truce was negotiated in the summer and was extended in September.

MEND has demanded a fairer distribution of oil wealth in the Niger Delta and wants oil revenue reinvested in the region, instead of enriching those whom the militants consider corrupt politicians.

Last week, the group said it was calling off the truce, but there have not been renewed attacks.