(CNN) -- Five people were detained off Somalia's coast Wednesday after pirates mistook a French ship involved in an anti-piracy operation for a commercial vessel, the French Defense Ministry said. 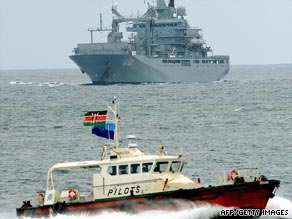 A German-flagged warship taking part in the EU's anti-piracy mission is pictured in this April 2009 file photo.

There were no injuries as a result of the attack on the BCR Somme, the ministry said. The pirates opened fire at midnight local time, about 250 nautical miles (463 kilometers) off Somalia's coast, officials added.

An hour after the attack, the French command and supply ship chased down one of the pirates' skiffs, and detained five suspected pirates, it said. A second skiff involved in the attack got away.

The BCR Somme was carrying supplies off Somalia's coast to forces involved in the European anti-piracy operation, called "Atalante," the ministry said.

Europe and other Western powers have stepped up their maritime patrols off Somalia's coast following a spate of pirate attacks over the past year.

Somalia's transitional government, which has a tenuous grip on power, has been unable to stop the pirates, many of whom are based in Somalia's port cities.

Those who have tracked pirate activity say it started in the 1980s in Somalia, when the pirates claimed they were aiming to stop the rampant illegal fishing and dumping that continues to this day off the Somali coast.

Piracy accelerated after the fall of the Somali government in the early 1990s and began to flourish after shipping companies started paying ransoms. Those payments started out being in the tens of thousands of dollars and have since climbed into the millions.

Some experts say companies are simply making the problem worse by paying the pirates.