UNITED NATIONS (CNN) -- Zimbabwe President Robert Mugabe used his address to the U.N. General Assembly Friday to slam sanctions imposed against him and others in his regime, blaming them for worsening the plight of people in his country. 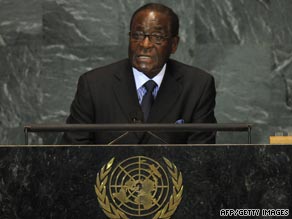 Robert Mugabe, speaking at the United Nations Friday, questioned the motives of the U.S. and the EU.

"While countries in the SADC (Southern Africa Development Community) region have made huge sacrifices and given Zimbabwe financial and other support at a time when they too are reeling from the effects of the global economic crisis, the Western countries -- in particular the United States and the European Union who imposed illegal sanctions against Zimbabwe -- have... refused to remove those sanctions," he said in the brief address, which lasted less than 20 minutes.

The controversial Zimbabwean leader -- blamed by the opposition in his country and many observers worldwide for a political crackdown and the enactment of policies that have left many more Zimbabweans in desperate hunger -- made a similar argument the day before in an interview with CNN.

Speaking to CNN's Christiane Amanpour, the 85-year-old Mugabe -- the only leader of Zimbabwe since it became independent from Britain in 1980 -- rejected repeated assertions that his policies have driven the nation, once known as Africa's breadbasket, to virtual economic collapse.

Instead, Mugabe accused Britain and the United States of seeking to oust him by imposing economic sanctions, the effects of which he said were worsened by years of drought.

He denied that his country is in economic shambles, saying it grew enough food last year to feed all its people, and defended policies that have driven white farmers off their land as properly restoring that land to indigenous Africans.

"The land reform is the best thing (that) could have ever have happened to an African country," said Mugabe, a former revolutionary leader who came to power when white-ruled Rhodesia became black-ruled Zimbabwe. "It has to do with national sovereignty."

It was Mugabe's first interview with a Western television network in several years, and he appeared to get frustrated with some of Amanpour's direct questioning, repeatedly denying widely accepted evidence and reports on his nation's woes.

Mugabe denied that his ZANU-PF party lost elections in 2008 that forced him to accept a power-sharing agreement with his chief rival, Morgan Tsvangirai, who now is prime minister. Violence surrounding the disputed election, much of it against opposition supporters, further damaged Zimbabwe's standing, but Mugabe rejected any blame on Thursday.

He also waved off Amanpour's assertion that the power-sharing arrangement is not working, and that opposition political figures are continuing to get harassed and arrested.

Asked about Roy Bennett, a white opposition figure who has yet to be sworn in as agriculture minister a year after formation of the power-sharing government, Mugabe stammered before saying Bennett faces charges of "organizing arms of war" against Zimbabwe. He added that he's heard the prosecution lacks evidence in the case, but said he won't agree to swearing in Bennett until after any charges are dropped.

Mugabe also denied any responsibility for harm to the nation from his economic policies, instead blaming what he called "unjustified" and "illegal" sanctions that he said were intended to bring regime change.

"The sanctions must be lifted. We should have no interference from outside," Mugabe said. "The continued imperialist interference in our affairs is affecting our country adversely."

When Amanpour challenged him by saying most of the sanctions were directed at individuals, rather than economic entities, Mugabe said she was wrong.

"The U.S. sanctions are real sanctions, economic sanctions. Have you looked at them?" he said. "It's because of sanctions, mainly."

Amanpour tried to push the point, saying outside observers blamed his policies and not sanctions. "Not everybody says so," Mugabe cut her off. "It's not true."

He also rejected criticism from South African Archbishop Desmond Tutu, a Nobel Peace Prize winner for his role in the anti-apartheid struggle, who has accused Mugabe of turning Zimbabwe into a "basket case" and repressing his own people.

"It's not a basket case at all," Mugabe said. He later called Tutu's comments "devilish talk" and added: "He doesn't know what he's talking about, the little man."

On the takeover of white-owned farms -- a policy blamed for undermining the agriculture sector -- Mugabe displayed the African nationalist fervor of his revolutionary days.

"Zimbabwe belongs to the Zimbabweans, pure and simple," he said, then adding that white Zimbabweans -- even those born in the country with legal ownership of their land -- have a debt to pay.

"They occupied the land illegally. They seized the land from our people," Mugabe said. When Amanpour pressed him on white farmers being forced off their land, he shot back, "Not just off their land. Our land."

"They are British settlers," he said, later calling them "citizens by colonization, seizing land from original people, indigenous people of the country."

Asked if would run again in elections likely to take place in 2011, Mugabe refused to answer, but denied he feared defeat and again rejected charges of past electoral wrongdoing.

"Elections don't go all that smoothly all the time in many countries," he said, tossing a jab at the United States. "Look what happens elsewhere. They didn't go smoothly here, look at what happened during the first term of Bush."