(CNN) -- Lisa Gibson -- who lost her brother in the 1988 Lockerbie bombing -- sat down the other day with the man many blame for the notorious attack: Libyan leader Moammar Gadhafi. 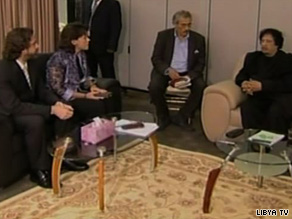 Lisa Gibson, who met with Libyan leader Moammar Gadhafi, called herself an "ambassador of reconciliation."

"I welcomed him to America," Gibson told CNN.

The 39-year-old Colorado Springs lawyer said she and another relative of a Lockerbie victim went to see the controversial figure in New York on Wednesday, the same day he delivered a rambling speech to the U.N. General Assembly.

Calling herself an "ambassador of reconciliation," she views the encounter as the latest step in a journey to build bridges between Libyans and Americans -- a mission energized by her strong Christian faith.

"I wanted him to know there were some people out there who've lost loved ones who have a different vision and different heart," she said. "He warmly received us."

Gadhafi mentioned this encounter during an interview for CNN's Fareed Zakaria GPS show. The Libyan leader is reviled by many relatives of the victims of Pan Am Flight 103, which blew up in a terror attack over Lockerbie, Scotland, in December 1988.

In New York this week, demonstrators, including Libyan expatriates and relatives of victims, gathered near the United Nations to protest Gadhafi's appearance ahead of his speech.

Gadhafi stirred up anger recently when he permitted a large welcome for Abdelbeset Ali Mohmed al Megrahi, the Libyan convicted of the Pan Am bombing.

Megrahi is the only person convicted in connection with the attack, which killed 270 people including 189 Americans. He has terminal cancer, and Scottish authorities released him from jail last month on compassionate grounds, about eight and a half years after being sentenced to life in prison.

Controversial and contentious, Libyan leader Moammar Gadhafi shares his perspective on the U.N. and world affairs with Fareed Zakaria.
Sunday at 1 p.m. ET

The celebration of al Megrahi's homecoming infuriated some families of the Pan Am 103 victims.

Susan Cohen, whose daughter died in the attack, said she blames Gadhafi for her daughter's death. She emphasized that Gibson's actions do not reflect the sentiments of the families of the victims.

Kathleen Flynn, whose son died in the attack, said visiting Gadhafi is "something that I have trouble understanding. Then again, people handle grief in different ways. To each his own, that's the way she's confronted her grief."

Gibson said she is motivated by her Christian faith and one of its overriding tenets -- forgiveness. However, she added that she isn't exonerating anybody.

"As a Christian, I need to forgive you. Only God knows if you are responsible," she said.

She was 18 years old when she lost her brother Kenneth James Gibson, who was a U.S. service member based in Germany when he was a passenger on the flight.

Gibson said she has tried to understand the terrorism emanating from the Muslim world over the years and dedicated her life to build a "bridge of reconciliation" with Libya.

She wrote a letter of forgiveness to Megrahi a few years ago and she said he wrote back to say he was sorry for her loss.

"At the heart of terrorism is hate and the only way to effectively battle that is with love," she said.

She made contact with, and formed a close relationship with, Ali Aujali, Libya's ambassador to the United States.

Gibson formed a group called the Peace and Prosperity Alliance, a non-governmental organization involved with business and educational projects in Libya.

She regards her group as a "conduit of change." Gibson said Libyans have been touched by her effort to forgive.

Gibson said her actions don't "undermine the losses or say it was OK." But she believes her slain brother would support her. She believes he'd think "I don't want my death to be in vain."

She wanted to continue her journey of building bridges by meeting with Gadhafi.

"He said he very much appreciated us coming and welcomed us," Gibson said.

All About Moammar Gadhafi • Lockerbie • Libya