Profile: Who is Robert Mugabe?

(CNN) -- Zimbabwe President Robert Mugabe, who is scheduled to give a rare interview to CNN's Christiane Amanpour Thursday, is one of the most controversial world leaders of recent times. 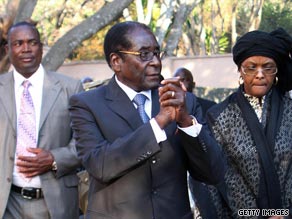 Zimbabwean President Robert Mugabe meets a delegation from the EU earlier this month.

For many years Mugabe was viewed as an African liberation hero -- much like South Africa's Nelson Mandela.

But more recently political rivals in Zimbabwe, as well as critics around the world, have accused Mugabe of turning a nation once known as the breadbasket of southern Africa into one wracked by hunger and sky-high inflation.

His supporters are also accused of using political intimidation and violence against their opponents to keep the 85-year old leader in power.

Mugabe, who was born in 1924 in the south of Zimbabwe -- then known by its British colonial name Rhodesia -- spent his early career as a teacher.

Drawn to the struggle for independence, he fled the country in the early 1960s, only to be jailed for 10 years on his return in 1964. On his release he formed Zanu-PF, which he led from neighboring Mozambique, as it and other guerilla movements fought for independence in Zimbabwe.

The conflict came at the same time as the ANC in South Africa, led by Nelson Mandela, engaged in its struggle to overthrow apartheid, a cause that drew strong support from Mugabe and his followers.

In 1980 Mugabe became prime minister of the newly formed Zimbabwe, assuming the position in 1987 of president. His liberation credentials held him in good stead during the early part of his leadership, with many seeing him as a politician who could unite a country that had been divided through civil conflict.

But in 2000 he drew criticism for his land reform program, when white farmers were evicted from their land, which was given to poor black Zimbabweans, many of them veterans of the struggle for independence with limited knowledge of commercial farming. Soon, agricultural output began to decrease sharply.

Overseas, Mugabe's relationship with nations beyond southern Africa became rocky. In December 2003 Zimbabwe withdrew from the Commonwealth, the organization of the United Kingdom and predominantly her former colonies. Five years later the UK government stripped Mugabe of the honorary knighthood he had been awarded by Queen Elizabeth II.

The European Union has also continued to impose sanctions on Mugabe and his allies until Zimbabwe improves its human rights record and moves ahead on a power-sharing plan.

Yet within southern Africa he still finds support among many for his image of a freedom fighter, as well as his defense of Africa and criticism of former colonial powers such as the UK.

By 2008 inflation in Zimbabwe had soared to 200 million percent, leaving bank customers' savings worth less on withdrawal than when they started queuing at the bank. Food shelves were empty, international isolation continued to hit the economy and corruption was rife.

A power-sharing agreement was eventually signed in September last year, but a government of national unity was only formed in February 2009, after Tsvangirai was sworn in as prime minister.

Since then food has returned to store shelves, long lines at banks and gas stations have dissipated and foreign bills have restored the flow of cash.

International news organizations such as CNN, which were banned from reporting from the country, now have official sanction to return.

But lack of food still affects many parts of the country, corruption is rife and both sides of the coalition continually take issue with each other.