(CNN) -- Zimbabwe appears to be showing signs of recovery, but it is starting back from a very low base. 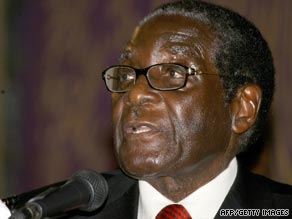 Controversial President Robert Mugabe will speak to the United Nations on Friday.

Food is on store shelves, most teachers have returned to work, long lines at banks and gas stations have dissipated, and the worthless currency has been replaced by multiple foreign bills.

But school supplies are scarce, parents pay for education with livestock, hunger is widespread, and the United Nations says Zimbabwe has similar problems to a war zone.

Just a year after the longtime ruling party Zanu-PF agreed a power sharing deal with Movement for Democratic Change, there is still a long way to go.

On Friday President Robert Mugabe speaks to the U.N. General Assembly. On Thursday, he will sit down for an exclusive interview with CNN Chief International Correspondent Christiane Amanpour.

The interview will be Mugabe's first with a major Western media organization in years, and it comes just weeks after a ban on CNN entering Zimbabwe was lifted.

Since the power-sharing deal, scores of MDC MPs have been arrested in what many believe is an attempt to undermine the party's parliamentary dominance.

One of them was Roy Bennett, who spent a month in prison and is the MDC's pick to be deputy agriculture minister.

Bennett is a longtime enemy of Mugabe, and the president now says he can be sworn into office only if he is cleared of the sabotage charges he faces.

Watch as Bennett accuses Mugabe of being racist »

"The fact that I am white is one of the first problems. The second problem is that I have the support of my fellow Zimbabweans.

"You are dealing with a person who is a severe dictator, who under no circumstances wants to relinquish power."

MDC leader and Zimbabwe Prime Minister Morgan Tsvangirai added: "The delay which is taking place for his swearing in is deliberate -- to frustrate him, to frustrate our constituency, to send a message: 'look, we can do this; we can do this unilaterally' -- and that is what we are trying to oppose."

The MDC has also rejected as unilateral the reappointments of the governor of the reserve bank and the attorney general.

According to the political agreement, Mugabe was to consult Tsvangirai before filling these key posts.

But the minister of state for presidential affairs, Didymus Mutasa, insists that the two appointments are not covered by the deal because they were made before the unity government was formed.

"Mr. Tsvangirai's concern is no concern at all, because these people were appointed before Mr. Tsvangirai was appointed, and how could our president consult a person who was not there?" Mutasa asked.

Since Zimbabwe got rid of its worthless currency, the Zim dollar, in February -- opting to use multiple foreign bills like the South African rand, the U.S. dollar and the euro -- food and other basic goods are back on the country's once empty store shelves.

But Zimbabweans without access to foreign currency can't shop. For those who don't get paid in U.S. dollars or don't have relatives abroad to send them money, livestock can be an alternative currency.

In rural Zimbabwe, chickens are valued at just under U.S. $4 each, and some parents use them to buy education -- U.S. $24 a year but still beyond the means of many -- for their children.

Watch how desperate public education is »

School headmaster Nonkulilelo Ndlovu said, "When the parents bring a chicken to sell or to offer as school levy, teachers sometimes buy it, so if they agree on the price, the teacher would get the item, pay the fees, and then if there is any change, he would give the parent the change."

The unity government has managed to get some striking teachers back into classrooms by offering them an improved salary of U.S. $150 a month, but it's hardly a living wage.

The education department estimates that it could take 10 years to get Zimbabwe's education system to where it was in the early 1990s.

Until recently, the country's banks would on a daily basis be packed with people lining up to withdraw money as inflation soared to above 200 million percent. Prices would go up by the hour, but now they have stabilized.

And now a debate is raging around when Zimbabwe will have its own currency again.

Finance Minister Tendai Biti has threatened to resign if the Zim dollar is returned prematurely. He wants the economy to recover first.

The reserve bank governor, on the other hand, wants the Zim dollar back in circulation for the sake of sovereignty.

The United Nations Development Programme says the humanitarian needs in this country are similar to those in war zones.

Spokesman Agostinho Zacarias said, "At the moment, I think it is one in every 14 people, we can consider them malnourished."

He added that the global economic crisis has resulted in Zimbabwe receiving only 40 percent of the funds it needs for food aid.

Donor countries are waiting for real change in Zimbabwe before they release financial assistance for the country's economic recovery. Meanwhile, ordinary Zimbabweans continue to struggle.