(CNN) -- Somalia's interim prime minister said Thursday that he has spoken to one of two French hostages seized earlier this week by gunmen who stormed their hotel in Mogadishu. 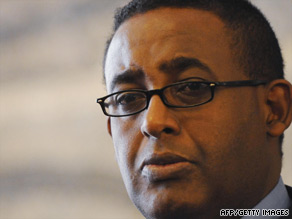 Omar Abdirashid Ali Sharmarke said the government will hold Hizbul Islam responsible for the safety of both men.

Omar Abdirashid Ali Sharmarke told a news conference at the presidential palace in the Somali capital that the hostage said he was in good health and is being treated well.

Sharmarke said three low-level security officials have been arrested for their involvement in the kidnapping. The Somali government is negotiating the release of the hostages, who are being held by Islamist militants, he added.

The two French nationals -- who have not been identified -- were abducted Tuesday when a group of about 10 armed men raided the hotel where they were staying. The French Foreign Ministry said the two were on an official mission to help the Somali government with security. The ministry has not divulged any details of its efforts to release the hostages, saying only that it is "mobilized."

The two advisers had apparently told the hotel they were journalists, something that the media watchdog group Reporters Without Borders has criticized.

"We hope these two advisers are freed quickly, but we are shocked that they were passing themselves off as journalists," Reporters Without Borders said. "They were on an official mission and had no need of cover. Their behavior endangers journalists in a region where media personnel are already in danger."

Sharmarke said the two hostages were kidnapped by the militant group Hizbul Islam but later were transferred to Al-Shabaab. Both Islamic insurgencies are trying to topple the current Somali government.

Eyewitnesses said a group of gunmen stormed into the Sahafi hotel, which is frequented by foreigners, and took the two blindfolded and bound hostages on foot toward Mogadishu's Bakara market, a stronghold for Islamist insurgents fighting against the Somali government.

The Somali prime minister said that the government will hold Hizbul Islam responsible for the safety of both men. He did not say if any demands had been made for the hostages' release.

Hizbul Islam is led by Sheikh Hassan Dahir Aweys, a bitter rival of Somalia's transitional president, Sheikh Sharif Ahmed. The two men once shared leadership of the Alliance for the Re-Liberation of Somalia, which opposed the presence of Ethiopian forces in Somalia. The alliance split because the two leaders disagreed over whether to use force to oust the Ethiopian forces.

Hizbul Islam and Al-Shabaab have continued their fight in Somalia despite the withdrawal of Ethiopian forces earlier this year. The United Nations had hoped that the withdrawal of the Ethiopians and the election of Ahmed -- an Islamist -- to the post of transitional president would help quell the insurgency in Somalia.

The Islamist insurgency is led by Al-Shabaab -- an al Qaeda-linked group that is on the United States' terror list. It wants to overthrow Somalia's weak, transitional government and implement a radical version of sharia, or Islamic law.

Fighting in Somalia's capital city has displaced 200,000 Mogadishu residents since early May, according to the United Nations.