(CNN) -- Somalia's transitional government has the right to request military help from its neighbors against armed militants, the African Union said Monday, but Kenya was quick to reject the idea of sending troops and suggested the AU should spearhead such a move. 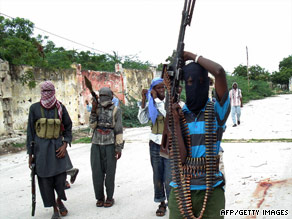 "Militants are wrestling the power from the government and so we call for military help from neighboring countries," the speaker said at a news conference in Mogadishu. "Please send your military to help in 24 hours' time."

But Alfred Mutua, spokesman for the Kenyan government, told CNN that "Kenya doesn't engage in military support to our neighbors." He said that any such support would be under the umbrella of the African Union.

However, he did say that "different types of support can be given, not just military, and Kenya's options are open." He said that the government should announce by Wednesday how it will move forward.

Jean Ping, chairman of the African Union Commission, said in a communique issued Sunday that the transitional government, as Somalia's legitimate government, "has the right to seek support from AU Member States and the larger international community."

Ping also said that the AU would "continue to do its utmost to assist the Somali people and its authorities in their lasting quest for peace and reconciliation."

Somalia's call for help came hours after a third top politician was killed in ongoing fighting in the capital.

Mohamed Hussein Adow, a powerful member of parliament who was leading the fight against the Islamists, was slain Friday in the north of the city.

Madowe said a Pakistani militant who is a high-ranking official in al Qaeda is leading the fighting in Somalia against the government.

He warned that militants will spread fighting into the rest of the region if they topple the government in Somalia.

Mohammed Amiin Adow contributed to this report for CNN