(CNN) -- A U.N. special investigator called for the resignation of top Kenyan officials and sweeping changes in the country's security forces to end reported widespread killings by police across the African nation. 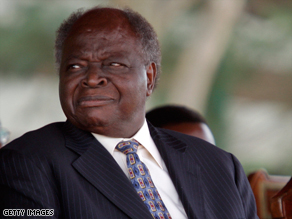 The report urged President Mwai Kibaki to publicly acknowledge his commitment to ending the killings.

"The special rapporteur concluded that police in Kenya frequently execute individuals and that a climate of impunity prevails," Philip Alston said in a report a recently submitted to the U.N. Human Rights Council in Geneva.

"Most troubling is the existence of police death squads operating on the orders of senior police officials and charged with eliminating suspected leaders and members of criminal organizations."

The report calls for the resignation of Kenya's attorney general and the immediate replacement of the police commissioner. It also says Kenyan President Mwai Kibaki should publicly acknowledge his commitment to ending unlawful killings by the police.

The Kenyan government expressed its "deep displeasure" with the report, questioning the special investigator's "approach, conduct and method of work."

"The government expresses grave concern regarding the allegations contained in the report by the special rapporteur," said Alfred Mutua, a spokesman for the Kenyan government. "His questioning of the very basis of the Kenyan state and, in particular, its institutions is totally unacceptable and impinges on Kenya's sovereignty."

Alston also accused government security forces of torturing and killing hundreds of men in a March 2008 crackdown on a militia in the Mt. Elgon district, in western Kenya. And he said there was compelling evidence that what he called police death squads were operating in Nairobi and Central Province with a mandate to "exterminate" suspected Mungiki gang members.

"These are not "rogue" squads, but police who are acting on the explicit orders of their superiors," he said.

The Mungiki militia, which is loyal to Kibaki's Kikuyu tribe, began as a religious sect, but over the years has morphed into a gang that runs protection rackets -- particularly in the slums.

The U.N. investigator suggested Kibaki acknowledge the alleged police killings and commit to stop them. He also advocated creating an independent civilian police oversight body, and said the prosecutor of the International Criminal Court should investigate violence after the 2007 election. He urged the government to create a witness protection program as well.

Alston, who investigates human-rights problems around the world for the United Nations, traveled to Kenya at the government's invitation. He stayed for 10 days in mid-February while 100 interviews were conducted in the U.N. member nation.

There is hope for Kenya despite his criticism, Alston said.

"While the existing situation is bad, it is far from intractable," the report says. "If it so chooses, Kenya can significantly reduce the prevalence of unlawful killings."

All About Kenya • Mwai Kibaki