LAGOS, Nigeria (CNN) -- A militant group operating in the oil-rich Niger Delta region of Nigeria said Monday that it had destroyed several major oil pipelines in response to a military offensive. 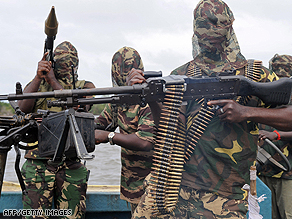 File image shows Movement for the Emancipation of the Niger Delta fighters.

The Movement for the Emancipation of the Niger Delta (MEND) said it had "put out of operation" a Chevron storage facility by destroying several pipelines that fed into it.

"This will henceforth become our standard mode of operation," the group said in a statement.

The U.S.-based Chevron Corporation could not be immediately reached for an assessment of the damage.

Nigeria's military has been clearing the western Niger Delta region in a major operation against MEND. The armed militant group demands that more of Nigeria's oil wealth be reinvested in the region instead of enriching those whom they consider corrupt politicians.

The group declared war against the government in September for what it said were unprovoked attacks. At that time, MEND destroyed several oil facilities, forcing Nigeria to cut its oil exports by as many as 1 million barrels of oil per day, or 40 percent.

The recent violence -- which has included attacks on pipelines and hostage-taking -- has limited shipment of crude oil supplies out of Nigeria, Africa's largest producer.

"We will continue our cat-and-mouse tactics with them (the military) until oil export ceases completely," the MEND statement said.