(CNN) -- Christian Eshiett was a rambunctious pre-teen who spent a lot of time cavorting with his friends in southern Nigeria. He would skip school and run away from home for days, frustrating his grandfather, who oversaw the boy's care. 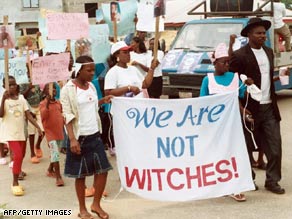 Children branded as witches protest on February 26, 2009, in the southern Nigerian city of Eket.

"I beat him severely with canes until they broke, yet he never shed a tear," said Eshiett Nelson Eshiett, 76. "One day, I took a broom to hit him and he started crying. Then I knew he was possessed by demons. ... Nigerian witches are terrified of brooms."

From that day two years ago, Christian, now 14, was branded a witch. The abuse intensified.

"They would take my clothes off, tie me up and beat me," he told CNN in a telephone interview.

The teen is one of the so-called witch children in Eket, a city in oil-rich Akwa Ibom state of Nigeria.

They are blamed for causing illness, death and destruction, prompting some communities to put them through harrowing punishments to "cleanse" them of their supposed magical powers.

"Children accused of witchcraft are often incarcerated in churches for weeks on end and beaten, starved and tortured in order to extract a confession," said Gary Foxcroft, program director of Stepping Stones Nigeria, a nonprofit that helps alleged witch children in the region.

Many of those targeted have traits that make them stand out, including learning disabilities, stubbornness and ailments such as epilepsy, he added.

The issue of "child witches" is soaring in Nigeria and other parts of the world, Foxcroft said.

The states of Akwa Ibom and Cross River have about 15,000 children branded as witches, and most of them end up abandoned and abused on the streets, he said.

Christian ran away from home and wandered around for two years with other children similarly accused. He said they stole, begged for food and performed menial jobs to survive.

The plight of "child witches" is raising concern among aid organizations, including the United Nations.

"It is a growing issue worldwide, among not just African communities, but in countries such as Nepal as well," said Jeff Crisp, head of policy development and evaluation for the U.N. High Commissioner for Refugees. "We are trying to see whether it is a neglected protected issue."

Belief in witchcraft thrives worldwide. About 1,000 people accused of being witches in Gambia were locked in detention centers in March and forced to drink a dangerous hallucinogenic potion, human rights organization Amnesty International said.

In 2005, relatives of an 8-year-old Angolan girl living in England were convicted of torturing her for being a "witch," according to the Times Online.

Pastors have been accused of worsening the problem by claiming to have powers to recognize and exorcise "child witches," sometimes for a fee, aid workers said.

But some are true believers, such as one minister in Lagos, Nigeria. He pinpoints children affected by witchcraft for free, he said.

"Sometimes, we get a dream that shows us a certain person is suffering from witchcraft," said the Rev. Albert Aina, a senior pastor at Four Square Gospel Church. "Sometimes, you have a child who has inexplicable body marks because of struggling in the night. They are easy to identify, but why charge when you have been given a gift by God?" Aina said.

Once a child is branded a witch, the stigma can last forever.

Christian was reunited with his grandfather, a former theater instructor at a university in Nigeria. Eshiett said he let his son's child return home because he loves him and he advocates for youth education.

But, he added, he does not think Christian has been or can be freed from witchcraft.

"When you are possessed, you are possessed; no one can deliver you from Satan," Eshiett said, adding that his grandson is a witch because he still exhibits unruly behavior and does not take education seriously.

Aid organizations acknowledge that the belief is acceptable and popular in some communities.

"It is not the belief in witchcraft that we are concerned about," Foxcroft said. "We acknowledge people's right to hold this belief on the condition that this does not lead to child abuse."

Foxcroft, whose documentary, "Saving Africa's Witch Children," was broadcast last year, spoke to a U.N. panel on the issue in April.

The aid worker said he is planning a global conference in 2010 and public awareness campaigns, including addressing the issue in Nigerian movies. The nation's film industry, dubbed Nollywood, is a popular form of entertainment in African countries.

Akwa Ibom recently added a clause into the Child Rights Act, saying that anyone found guilty of branding a child a witch would get up to 12 years in prison.

"This is groundbreaking, and Stepping Stones Nigeria applauds the Akwa Ibom state government for this," Foxcroft said.

But, he added, there is more work to be done, and other groups, especially churches, have to team up to resolve the problem.

"The role of the international Christian community in this cannot be underestimated," Foxcroft said. "Unfortunately, the fact remains that this belief system is being spread by so-called Christians."