(CNN) -- An archeological team is set to break new ground in its excavation of an Egyptian temple where doomed lovers Cleopatra and Mark Antony may be buried. 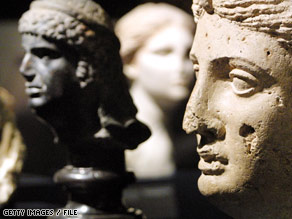 An excavation of an Egyptian temple my reveal where doomed lovers Cleopatra and Mark Antony are buried.

A ground-penetrating, radar survey of the temple of Taposiris Magna and its surrounding area, west of Alexandria, was completed in March, following three years of digging, according to a statement from Egypt's Supreme Council of Antiquities.

Taposiris Magna is one of the ancient towns located on Lake Mariut, which is today called Abusir.

According to the council, the radar revealed three possible spots of interest where a tomb might be located. Recently, the team discovered a large, previously unknown cemetery outside the temple enclosure.

"The discovery of this cemetery indicates that an important person, likely of royal status, could be buried inside the temple. It was common for officials and other high-status individuals in Egypt to construct their tombs close to those of their rulers throughout the Pharaonic period," according to the council.

The expedition has so far turned up 27 tombs, 20 of them shaped like vaulted sarcophagi, and seven simple burial chambers that are reached by staircases. Inside these chambers, the team found 10 mummies, two of them gilded.

Other discoveries include an alabaster bust of Cleopatra, and 22 coins bearing her "beautiful" image, according to council Secretary-General Zahi Hawass. The discovery contradicts some recent reports that describe her as unattractive, he said.

"Among the most interesting finds is a unique mask depicting a man with a cleft chin. The face bears some similarity to known portraits of Mark Antony himself," Hawass said.

The love story of Antony and Cleopatra has been a favorite theme for writers and filmmakers. The 1963 Oscar-winning movie of the couple starred Elizabeth Taylor and Richard Burton, who themselves became star-crossed lovers.

Cleopatra ruled Egypt between 51 B.C. until her suicide in 30 B.C., following Mark Antony's naval defeat against Caesar's adopted son Octavian at Actium in the Mediterranean. Mark Antony, once a general in Caesar's army, killed himself before Cleopatra took her own life, after being falsely informed that Cleopatra already had died.

All About Egypt • Archaeology • Zahi Hawass