(CNN) -- For four days, an American sea captain and four Somali pirates rode the waves of the Indian Ocean in an enclosed lifeboat, far out of sight of most of the world. 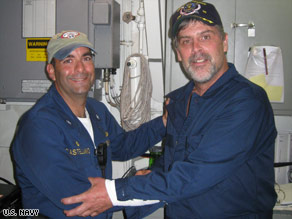 But for those four days, they were on the minds of people around the globe, from the captain's hometown in Vermont, to the White House, to port cities and anywhere that families send their loved ones off to sea.

"I actually was more concerned for his family," said Adm. Rick Gurnon, head of the Massachusetts Maritime Academy, where Capt. Richard Phillips had trained.

"I was pretty sure he would be OK," Gurnon said of Phillips, adding, "as a captain at sea, in a lifeboat, he was in an environment he was comfortable with even if he was sharing it with four armed Somali pirates.

"I was more worried for his family. They've been going through hell since Wednesday. This is truly a joyous day for them."

The waiting ended Sunday with news that U.S. Navy snipers had shot and killed three of Phillips' captors, with the fourth pirate in custody onboard the nearby USS Bainbridge, and that Phillips had been rescued uninjured. The expressions of relief and praise flowed.

Watch how SEALs took down pirates »

"I share the country's admiration for the bravery of Capt. Phillips and his selfless concern for his crew," President Obama said. "His courage is a model for all Americans."

Phillips offered himself as a hostage after the pirates stormed the U.S.-flagged cargo ship Maersk Alabama on Wednesday morning, according to Maersk Line Limited, which owns the ship. The pirates eventually left the Alabama with Phillips that day aboard the lifeboat, where they would stay for four days.

In Phillips' hometown of Underhill, Vermont, Maersk spokeswoman Alison McColl said Phillips' wife, Andrea, had spoken to her husband by phone after his rescue.

"She was laughing while she was on the phone with him," McColl told reporters. "She was saying his trademark sense of humor was still very much intact, and he's in great spirits. If you guys could have seen her light up when she talked to him, it was really remarkable."

McColl said Andrea Phillips and her family "have felt a tremendous amount of support from the entire nation."

"The thoughts, the prayers, the sentiments, the support you've shown has really helped them endure this very difficult situation," McColl said.

Still speaking for the captain's wife, McColl added: "She believes she can feel it, and she believes that her husband felt it out there in the middle of the ocean. So thanks to the entire nation, the local community, the state of Vermont, for all your help there."

Phillips was being praised for his apparent willingness to put his own life in jeopardy to secure the release of his crew and his ship.

But Gurnon, who described the captain as "the good shepherd who willingly exchanged his life for the lives of his flock," cautioned that the end of one hostage situation should not be taken as the end of the growing problem of piracy, especially with scores of other lives in peril from pirates who are holding ships and crews off the expansive Somali coast.

"While this is a great day for Massachusetts Maritime Academy and for all of our alumni and all mariners around the world, we still have more than 200 men and women held hostage in Somalia," Gurnon said.

"We should not let the spotlights, the TV cameras, the focus of the world be removed from that problem," he said.

All About Pirates • Somalia • Maersk Alabama