NORFOLK, Virginia (CNN) -- Negotiators aboard a U.S. Navy warship are trying to secure the release of an American freighter captain who is being held by pirates on a lifeboat off the coast of Somalia, according to Maersk Line Ltd. 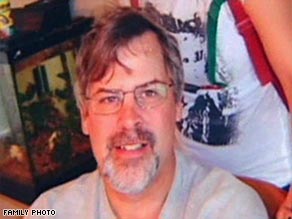 The crew aboard the destroyer USS Bainbridge could see the lifeboat where pirates have been holding Capt. Richard Phillips since Wednesday, the company said in a written statement issued at 5 p.m. ET.

Phillips has not been hurt, the statement said.

Phillips, who has received provisions and batteries for his radio, has been in touch with the crews of the Alabama and the Bainbridge, the statement said.

The pirates are the same four men who hijacked Phillips' vessel, the U.S.-flagged Maersk Alabama, early Wednesday hundreds of miles off the Horn of Africa.

The Alabama's 20-person crew later regained control of the ship, which is owned and operated by the Norfolk-based Maersk Line Ltd.

In a written statement, Maersk spokesman Kevin Speers noted that "there have been many questions about how the crew re-captured the ship and how the captain came to leave the ship."

But he would not clarify the matter.

"Our immediate focus has been to bring the current situation to a safe resolution," he said. "There will be time for due diligence and retrospective review once we have the safe return of all parties and the opportunity for a full de-briefing."

The U.S. Navy, which is in charge of the situation, requested the help of the FBI. FBI negotiators in the United States are in touch with the crew of the Bainbridge, which arrived on the scene earlier Thursday to assist, a senior U.S. defense official said.

According to Maersk's last communication with the Navy, the 28-foot lifeboat was disabled and "dead in the water," Speers said Thursday morning.

"We are encouraged that most of the crew is safe. They have been resilient and courageous throughout this crisis," Speers said. "But we will remain on watch, staffing our situation room and our family hot line until this situation is resolved and the captain is safely returned."

On Thursday, the Maersk Alabama resumed its journey to Mombasa, Kenya, with an 18-person armed security detail on board, according to Joseph Murphy, the father of the ship's first officer. Maersk and U.S. military officials confirmed the cargo ship had left the area on Thursday, but would not say where it was heading, citing security concerns.

Gen. David Petraeus, chief of U.S. Central Command, said Thursday that the Bainbridge would be getting backup shortly.

"I can tell you, there are definitely going to be more ships in that area in the next 24 or 48 hours, because there are two more sailing to it right now," he said.

"Needless to say, we want to ensure we have all the capacity that may be needed over the course of the coming days."

"Obviously, his main concern is for the safety of the captain and the rest of the crew on the ship, and he will continue to receive those updates," he said.

Secretary of State Hillary Clinton said an international coalition of countries is working to address the piracy threat, but the area in question is immense.

"I think the ocean area we're referring to is three times the size of Texas," she told reporters. iReport.com: 'Stop the pirates, Obama!'

Referring to continuing problems with piracy in those waters, she said instability in Somalia has contributed to the flourishing of "an old scourge."

The Alabama was loaded with food aid when the pirates hijacked it Wednesday, 350 miles off Somalia's coast -- a distance that used to be considered safe from pirate attacks.

It was the first time in recent history that pirates targeted an American ship.

Watch how pirates work off Somalia »

The pirates were armed with AK-47 assault rifles while the ship's crew carried no weapons, according to Ken Quinn, the second officer of the ship.

Crew members managed to take one of the four pirates hostage, Quinn said. The crew -- apparently minus the captain -- locked themselves in the compartment that contains the ship's steering gear, where they remained for about 12 hours with their captive, whom Quinn said they had tied up.

The pirates reneged on their agreement to exchange Phillips for one pirate whom the crew had captured. The pirate was released unharmed, according to Quinn, who spoke to CNN on Wednesday via a satellite call.

The pirates had scuttled the small boat they used to reach the ship, Quinn said, so Phillips offered them the Alabama's 28-foot lifeboat and some money.

"We returned him, but they didn't return the captain," Quinn said.

The U.S. Navy issued a warning several days ago to ships in the area that pirates were operating farther offshore.

There are emergency rations to last 10 days on the lifeboat, but the conditions are most likely "uncomfortable," according to Murphy.

"There's no toilet facilities or anything like that," he said. "The captain has a VHF radio, and I'm sure that he's in voice communication with the ship itself. The problem is, of course, that ... the [radio's] battery is going to die, and I'm not really sure how they're going to continue communication after that." iReport.com: How should the U.S. respond?

It is common for crews of merchant vessels to travel through the area unarmed despite the risk of pirate attacks, experts said. An armed crew could provoke a firefight that would endanger the crew's lives or its cargo, which often contains flammable or explosive material.

John Reinhart, chief executive and president of Maersk Line Ltd., said the crew can try to outrun the pirate boats or turn fire hoses on anyone trying to board the ship, "but we do not carry arms."