(CNN) -- A U.S. warship arrived before dawn Thursday near a 28-foot lifeboat holding four pirates and the kidnapped captain of a U.S.-flagged cargo ship, officials said. 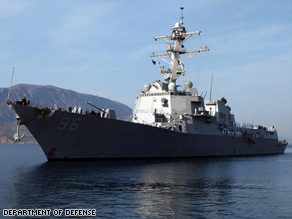 The USS Bainbridge, a guided-missile destroyer, is heading to the area to assist.

Also nearby was the Maersk Alabama -- which had been seized early Wednesday off the Horn of Africa. All 20 of its remaining crew members were in good physical shape, said Ken Quinn, second officer of the ship, in a satellite call placed by CNN.

Maersk spokesman Kevin Speers said the guided-missile destroyer USS Bainbridge was near the Maersk Alabama and that its crew was talking to the Navy.

"When the Navy comes in, they're in charge," Speers told CNN.

The hijackers boarded the Maersk Alabama early Wednesday, when it was about 350 miles off the coast of Somalia, a haven for pirates attacking shipping through the Gulf of Aden. Capt. Richard Phillips was being held in the lifeboat after the pirates reneged on their agreement to exchange him for one of their own, who himself had been captured by the crew members, Quinn said.

"We returned him, but they didn't return the captain," said Quinn, who added that the crew members were in radio contact with Phillips.

Quinn describes the hijacking to CNN »

By 8 p.m., the Bainbridge, part of the allied fleet that patrols the waterway, had reached the Maersk Alabama to assist, a senior Defense Department official said. A Navy plane had reached the area an hour before.

B.J. Talley, a spokesman for the Maersk line, said the ship was about 215 nautical miles off the Somali coast at 7 p.m. ET.

The 780-foot (237-meter) Maersk Alabama is the first U.S. ship to be seized in the latest wave of piracy off largely lawless Somalia. Joe Murphy, whose son Shane is the ship's first officer, called the hijacking "a wake-up call for America."

"They're making more money in piracy than the gross national product of Somalia, so it's not going to go away any time soon until there's international concern and international law enforcement," said Murphy, an instructor at the Massachusetts Maritime Academy.

The Gulf of Aden, at the southern mouth of the Red Sea, is a key transit point for ships moving into or out of the Suez Canal. In 2008, Somalia-based pirates attacked more than 100 ships in the gulf or off the Horn of Africa, capturing about 40 of them. The ships and their crews typically are held for ransom.

Since 2006, the United States has had an agreement with Kenya to try captured pirates with American assistance. Tom Fuentes, a former FBI official who worked with Kenyan authorities to prosecute pirates, said a 1988 treaty gives every nation the authority to pursue, capture and try pirates, regardless of the nationality of the victims -- but the United States can't tell shipping companies how to deal with hijackings, he said.

"Every shipping company so far has paid the ransom, and every victim has been released unharmed up until this point," he said.

After a lull early this year, attacks surged again in March, with 15 attacks reported to the Malaysia-based International Maritime Bureau, which tracks piracy. An international task force under U.S. command was set up in January to crack down on the problem, and the European Union, India, China and Russia have ships deployed to the area as well.

"I think Morocco was the very first country that recognized us, going back a long time," Clinton said. "We worked to end piracy off the coast of Morocco all those years ago, and we are going to work together to end that kind of criminal activity anywhere on the high seas."

The Maersk Alabama was carrying food aid bound for the Kenyan port of Mombasa when it was seized about 7:30 a.m. (12:30 a.m. ET), the ship's owner said. There were 21 American crew members on board at the time.

Quinn said the pirates were armed with AK-47 assault rifles, while the freighter's crew carried no weapons. The crew -- apparently minus the captain -- locked themselves in the compartment that contains the ship's steering gear, where they remained for about 12 hours with their captive, whom Quinn said they had tied up. The three other pirates "got frustrated because they couldn't find us," he said.

The pirates had scuttled the small boat they used once they climbed aboard the freighter, Quinn said, so Phillips offered them the Alabama's 28-foot lifeboat and some money.

John Reinhart, CEO and president of Norfolk, Virginia-based Maersk Line Ltd., said the crew can try to outrun the pirate boats or turn fire hoses on anyone trying to board the ship, "but we do not carry arms."

"There are starving people in Africa who need this food," Reinhart said.