HARARE, Zimbabwe (CNN) -- The 2-year-old grandson of Zimbabwe Prime Minister Morgan Tsvangirai drowned in a swimming pool, barely a month after Tsvangirai's wife died in a car crash, according to his spokesman. 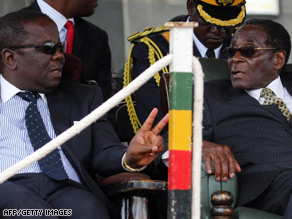 The child, Sean Tsvangirai, was at Tsvangirai's house in Harare when he was found drowned in a swimming pool Saturday afternoon.

"He had wandered off and was found later in the pool of the house," said Tsvangirai spokesman James Maridadi.

Sean will be buried Monday in Tsvangirai's home village of Buhera, where Tsvangirai's wife Susan was buried last month after dying in an automobile crash March 6.

Tsvangirai was in the crash as well and suffered minor injuries.

The prime minister returned to work last week. When Sean died, the prime minister was at a government retreat in Victoria Falls, where officials are attempting to come up with a blueprint to salvage the nation's collapsed economy.

At the retreat, the government adopted a 100-day renewal plan, according to state media reports. The retreat was attended by Tsvangirai, President Robert Mugabe and government ministers.